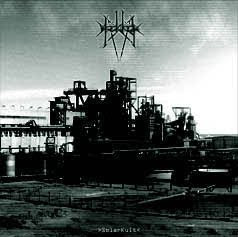 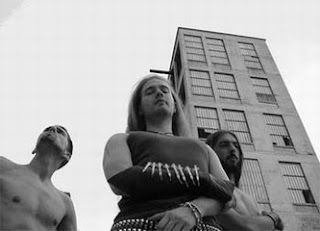 March of The Machines.
Blacklodge is an industrial black metal band from France. This band is the main concept of Satan in the modern age of now. Their sound is as if Terminator, A Nightmare On Elm Street, and Drag Me to Hell were fused together at the seems and were music and not movies.
Blacklodge is one of the bands with vocalist Saint Vincent, also of The Arrival of Satan and Vorkreist, on vocals, guitars, and drums/programming. His vocals as very much in tune with the direction of the song. Some songs he'll go for a straight more black metal scream while a more, almost dancy, industrial song like Iron Icon, feature some effects on his voice to make it sound more mechanical. But the overall sound picture is complete, it doesn't sound half-assed where the vocals are simply put on top of everything else, the vocals become part of the sonic picture.
The music itself, features the elements of both black metal and industrial music but it's overall sound can be traced to many more genres of music. While many of the riffs in particular can have their sound put very much into a black metal category, the overall sound features elements of noise, martial industrial music, rave/techno, and a little bit of trip-hop. All of these more electronically biased sounds give Blacklodge a very mechanical and almost military sound.
The riffs are very machine-like in nature as well, one example is a song like PsychoActive SataN, which is more mid paced, but has a great hooky main riff. As previously stated, most of the sound is black metal biased in the guitar riffs, but the patterns are played in an trance style, especially on a song like 11rd Eye Chemistry or the following track Drugz Mysticism [#A:Vision]. Songs do slow down somewhat on this album and that's when most of the more electronic influences come out, without being in a metal backdrop. The elements of techno and ambient music on songs like the end of TeknoShaman 666 or in a song like Luxifer Meme which has a more trace feel to the rhythm of the song. The noise genre is an influence on sections of songs where more harsh sounding ringing comes in either in the backround or right up front.
Blacklodge could not be construed as a super technical band, as most of their riffs are simple. But the same way a band like Rammstein can approach a song, Blacklodge seems to have a similar approach, with more simple riffs, but letting the more electronic elements of their music be at the forefront. With keyboards and samplers creating an atmosphere, as well as most of the drumming, of industrialism and war. One could almost call this album, Urban Black Metal, because of it's ability to create images of war, drugs, and industrial cities and streets in your head throughout this album with songs like Forge=PhoneniX or Prequel to The Kult.
An overall cool record with lots of cool effects and catchy riffs. Anyone could get into this, whether they're a fan of electronic dance music or satanic black metal. This is what Rammstein would probably sound like if they went black metal, I would imagine.
Overall Score: 8
Highlights: Iron Icon, PsychoActive SataN, Drugz Mysticism [#A:Vision], Luxifer Meme, Angels Refinery [C21H23N05 Mix], Martyr Complex, Templars
Posted by maskofgojira at 8:33 PM