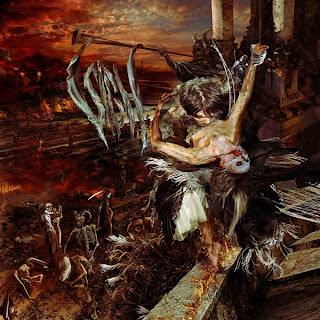 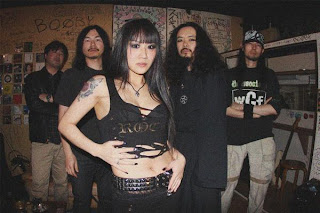 The Soundtrack to A Horror Movie, Metal Style.

Sigh is the Japanese avant-garde metal band that you know if you like weird music and never heard of if you don't. Sigh has always pushed the boundaries of musical styles within their own respective "black metal" sound. From 70's progressive rock to country, from black metal to doom metal, from heavy metal to post-rock.
"Scenes From Hell" is no different in that Sigh is just doing what they've always done. The only difference is that you don't ever know where Sigh is going to go from one album to another. On this album they've mixed more symphonic music with more traditional blackened death metal riffs. Though it might sound like this has been done a hundred times before by other symphonic metal bands and symphonic black metal bands, you've never heard it done like this.
Sigh has taken the symphonic from more orchestral strings to a fuller sounding orchestra sound with full strings, brass, and even woodwind sections. This can be off-putting at some points because of the mixing of this. At some points during Prelude to The Oracle, the brass section is louder than anything else in the mix except to vocals. Another thing that can turn fans off is the density of this sound, with both metal sections and an orchestra playing simultaneously, it makes this album sound very crammed and can take a few listens to hear just what is going on in a single song.
This is also the first "official" Sigh album that Dr. Mikannibal is apart of, though she did the majority of vocals on the tribute to Venom album. She does more death metal vocals that mix very well with Mirai's more traditional black metal screams showcased on a track like Vanitas. This is the majority of her presence on this album, but she does provide a saxophone for the band as well.
The guitar tone is very similar to the one found on Sigh's more progressive songs. It has a very 70's rock vibe to it, as oppose to more traditionally black metal guitars. The way the guitars are played gives off a more doom metal vibe, with slower, heavy sounding riffs. This style give the symphonic parts a larger place to make their parts shown. Musica In Tempora Belli is one of the few tracks where the guitar is more dominant in the mix. In the particular track, the guitars are playing a faster, more melodic riffs compared to the more doom based ones played on other songs.
The Red Funeral is a very big sounding song, with an almost military-like drum pattern. This juxtaposes the more wild playing of the orchestra. While Mirai's vocals are very rabid sounding as well, the finale of the song concludes it very well in a minute of more sobriety. This track leads into The Summer Funeral, a monolith of a track with very movie-score like qualities to it. The strings take a large part in this song, while more dark riffs and pianos are played supporting the bigness of the orchestra.
This record will be one that could grow on people, but will most likely divide fans over it's sound. Being very focused on the orchestral sound, rather than the band. This is an interesting album with a lot to be heard when you listen to different things.
Overall, this is a fairly decent record with a lot of styles being melded together, once again, by Sigh. This is not a record where everything will be heard on the first listen. This is a good album if you're willing to really commit to listening to everything.
Overall Score: 8
Highlights: L'art De Mourir, The Soul Grave, The Summer Funeral, Scenes From Hell
Posted by maskofgojira at 1:51 PM