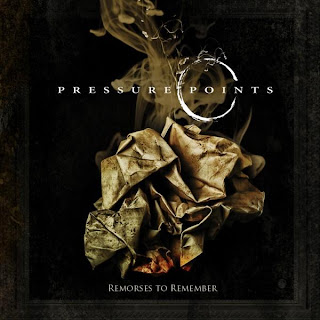 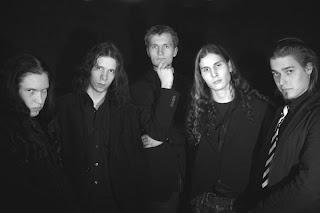 Pressure Points is a progressive death metal band from Finland. This is their first release and their seem to have a pretty firm grip of the sound they wanted to go for on this record. You could see a lot of people getting into this band if you like who their compared to in reviews.
The 10 minute opener Atonement certainly paints a picture for the listener. This band has all the right ingredient for their sound to be original. This song easily will have people drawing comparisons to bands like Opeth, but it actually sounds closer to what Swallow The Sun are doing. This track has those Opeth moments, but has a very doomy vibe to it and sounds more similar to a STS song.
This band has the elements of progressive rock and psychedelic rock mixed in with more of a doom metal or death/doom style. Definitely, this is a sound that is sure to catch people off guard being only a debut album. But it's not in the style that makes this band unique, it's how it's used.
Like Swallow The Sun's more progressive moments, they're melodic but have a tendency for being off-kilter. Another band that is maybe a little clearer comparison is the new band Barren Earth, which features member of Amorphis, Moonsorrow, and Swallow The Sun.
The musicianship in this band is on par with all of their piers. With more melodic and soulful sections intertwined with more brutal and heavy aspects of metal. Temptation For Hate is a track that begins to show a bit of a crazy tendency for more black metal bits of intensity.
The progressive moments are fully showcased in every song. Like an Opeth song, or from any band that's progressive, melody is always a part of their sound, and that's the sweetness that will keep people coming back, the hooks. The melodies at the end of Edge of Endurance is pure epic styled goodness.
Even during the more mellow and acoustic passages that make up the progressive rock side of Pressure Points are enjoyable. The interlude, Calm, expresses almost bluesy passages with flutes playing along with it. Rounding out this band with more musical expression that just metal.
The Opeth comparason is most visable on the last three tracks, which all reek of Opeth's influence. Beginning with clean guitars and leading into a melodic heavy passage. While the vocals just sound like he's trying to be Mikael Akerfeldt, from the growls to the almost soulful cleans.
The overall impression you get from this band is that they are so close to finding their own sound, but it is just eluding them. This album brings with it all the influences needed for an original sound and Pressure Points make it work. This debut is very good, one of the best in recent years for a debut album.
Overall, this record is a must for all fans of extreme prog. From the Opeth-like qualities to the Swallow The Sun like playing style, this is a must for this year. Check this band out if you like original music from original players, who don't BS their music for an image.
Overall Score: 9
Highlight: Atonement, Edge of Endurance, The Past Within, Grand Delusion
Posted by maskofgojira at 3:47 PM