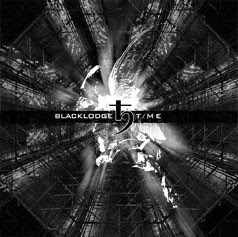 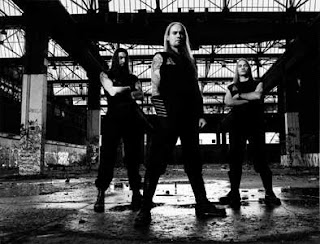 Blacklodge has returned 4 years after the release of 2006's "SolarKult." Having worked in his other projects, Vorkreist and The Arrival of Satan, Saint Vincent bring a newer vision for what "T/ME" should be conceptualized as sound-wise. This new album brings a different sound to the more industrialized sound of Blacklodge.
This album is a split album with Abigor. As such, this album is just under 40 minutes so that both these records could be released together in a single format. For clarification, this is not a collaboration album, it is a split, so it is a record from both Abigor and Blacklodge.
"T/ME" brings with it a newer form of electronic music. As on previous outputs, this album has the more black metal sound with more electronics on top of it. But this record mixes more noise, ambient, and spoken word with the already vicious sounds of their past work.
Spoken word is exorcised in the opener, Lambda [Or The Last of The Gods; Being The Secret of SataN], with more spoken voices over more trip-hop like soundscapes. This serves as an exercise in experimentalism for Blacklodge before the more harsh industrial sounds of Vector G [Gravity XVI]. The two songs bring a theme of darkness overtaking light shown more through the overall sound of the two songs rather than the lyrics. Both these tracks feature spoken word parts, more so the opener, but are very electronically based in sound.
Vector G [Gravity XVI] has a very noisy electronic based sound, filled with little sounds that take multiple listens just to hear. This track also has a very catchy riff that Blacklodge is known for. This riff is simple, but effective in the overall feel of the track.
Sulphuric Acedia follows that track with a more techno-trance beat, with a lot of repetition in the patterns. More industrialized guitars are layered on top of these beats which adds to the processed sound of this song. Once again, the guitars are playing more simple riffs, but are playing several melodies over each other creating a very hard sounding wall of sound.
Saturn follows this with the most wild sounding song on this album. Very fast trance-like beats are being played under numerous synthe effects and harsh guitar riffs. Vocally, Saint Vincent brings a doomy sound to this track. Though wild and spastic sounding it compensates it with a very open sound that makes everything sound and feel very big. This all ends with a more noise sounding ending with mechanical vocals speaking on top.
...Stupefying [Suicide Tutorials Pt.11] is the final track almost 9 minutes long. The song is very focused sounding, with more trippy or hip-hop beats underneath noisy guitars and spoken word atop it all. As the song progresses, the guitars gradually are moved underneath a synthe. The guitars carry the bulk of the rhythm on this track, giving it an interesting vibe. The vocals also increase in intensity throughout the song, gradually becoming more and more angry sounding.
Overall, this is a strong album with interesting, experimental songs. For a split album, it carries with it a strong sense of song structure, never making anything too out there for a casual listener to shy away from. The sound is definitely original and worth a mention. Check this out if you like experimental music.
Overall Score: 8
Highlights: Vector G [Gravity XVI], Saturn, ...Stupefying [Suicide Tutorials Pt.11]
Posted by maskofgojira at 3:43 PM