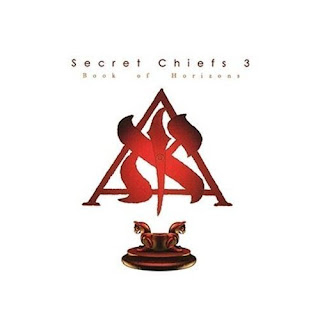 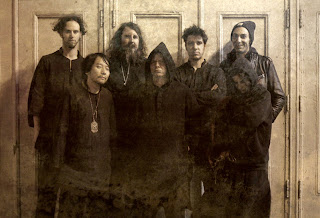 One Book For Six Suns.

Secret Chiefs 3 is a band with many sounds, many twists, and many members. Avant-garde in nature, they create music that breaks boundaries. No other band has been this eclectic, mixing styles from metal to electronic to klezmer music.
"Book of Horizons" can best be described as bits and pieces of SC3's different collective influences on one album. Since band leader and founder, Trey Spruance, has mentioned that SC3 is actually 7 different projects within the guise of one band. These 7 different bands six have their part on this album.
The first band is FORMS. This band's sound focuses on more avant-garde interpretations of almost classically compositions. While opener The End Times features more orchestral arrangements, The Owl In Daylight goes from that more classically based sound through bits of jazz and electronic moments. Closer, Welcome to The Theatron Animatronique, features almost operatic influences with suiting musical accompaniment. Sections in this finale feature an almost Italian avant-garde sensibility to them.
The second band is Ishraqiyun. This band features more oriental themed musical styles. The 4 (Great Ishraqi Sun) features the use of more tribal drums, violins, and sitars, creating a very unique Arabian sound. The 3 has more elaborate musical touches, with elements of jazz mixed with this more oriental sounds. This track has a more classical approach toward the way this song was mixed and performed with a very large, almost live sound.
Band three is the Traditionalists. This band's sound is based more in cinamatic music and movie scores. The Industrial Drop being based very much in the vain of Philip Glass' minimalism style compared to The Exile which features a large influence from Ennio Morricone. The Electrotheonic Grail Dove features more of the Philip Glass approach with more Piazzolla take on the violence of the structure.
The fourth group is Holy Vehm. This group's sound is Spruance's influences from move aggressive music like metal and hardcore. Both pieces on this album were composed by Enemy. The first song Exterminating Angel begins with a more black metal sound, before moving into a more spastic death metal song. Hypostasis of The Archons continues with a very spastic black/death metal sound that branches into electronic and noise music at some points.
The fifth band is The Electromagnetic Azoth. This bands sound is rooted firmly into more electronic music. The closest resemblance to this band's sound is to Spruance's former band Mr. Bungle's song *Desert Search For Techno Allah,* where the music is very much electronic, but features a lot of influence from more African and Arabian music. On The Wings of The Haoma shows this style. DJ Revisionist continues in the same vain but is a little more wild in terms of composition structure.
The final group is UR. The group comes from Spruance's love of surf rock music but mixed with Arabian, Indian, and Persian styles. Book T: Exodus was originally composed by Ernest Gold for the movie The Exodus. It features a very classically influenced song with surf rock tones. Anthropomorphosis - Boxleitner moves from style to style, probably one of the most "avant-garde" songs on this album, moving from simple keyboard melodies toward more violent classical moments and into surf rock sensabilities.
Overall, this is a good start for anyone looking to expand into new musical styles or getting into SC3's music. Since this album features something from almost all of the bands that comprise, this band, it can give you a sample of the different things you will hear from SC3. Check it out.
Overall Score: 8
Highlights: The End Times, The 4 (Great Ishraqi Sun), The Exile, Book T: Exodus, Hypostasis of The Archons, DJ Revisionist, Anthropomorphosis - Boxleitner
Posted by maskofgojira at 2:09 PM