Freak Kitchen - Land of The Freaks 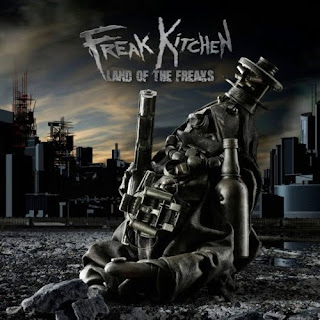 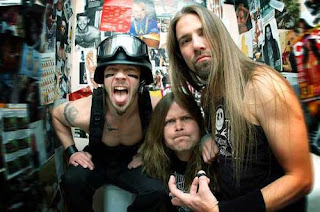 Freaks Welcome!
Freak Kitchen is a trio for all of you new comers to this band. Band member include Bjorn Fryklundh on drums, Christer Ortefors on bass, and Mattias IA Eklundh on vocals and guitar. FK has had very little trouble with line-up changes over the years, the only one being in 2000 where the old bass player and drummer quit, but since then FK has been running better than ever. Coming out with genre defying albums that mix "old-school" heavy metal, prog-rock, jazz, blues, pop, and every other style under the sun into the mix.
There are two things a fan of Freak Kitchen can always depend on when a new album comes out. The first is the great and underrated guitar playing of Eklundh, who shows a great mastery of his instrument. The other is the uncharacteristic lyrical approach to FK's lyrics. This can be seen just from looking at song titles like God Save The Spleen, Honey You're A Nazi, or Murder Groupie.
The songs themselves show hooky melodies and a staccato style of guitar playing that usually leads to an incredible solo. When listening to songs like God Save The Spleen or Hip Hip Hoorah, the choruses can usually lead to you humming them later on or even singing them. Be prepared for uber catchiness.
The previous style mixing shows on songs that could trip up a "regular" prog-metal/rock fan. The funk styled bass slapping on Teargas Jazz or the more heavy metal played Sick Death By Hypochondria with a pop-like chorus. Even the jazz hinging OK could bring a prog fan to a head scratching moment. A metal head could just as easily enjoy the "seemingly" Meshuggah influenced Honey You're A Nazi as the could enjoy the real thing.
Overall Score: 8
Highlights: God Save The Spleen, Hip Hip Hoorah, Sick Death By Hypochondria, Honey You're A Nazi, The Only Way, One Last Dance, Clean It Up
Posted by maskofgojira at 3:34 PM