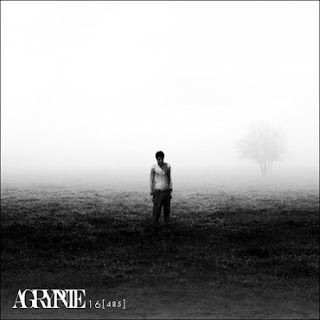 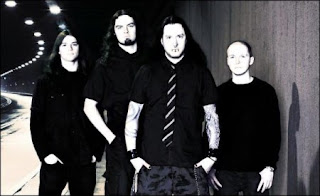 Better Off Alone, That's What They Believe.

Agrypnie is an industrial tinged black metal band from Germany. Taking elements of more modern society and more depressive aspects of loneliness and adding it to their sound. "16(485)" is their new album, and includes more progressive aspects.
Back in 2008, Agrypnie released "Exit," which included a lot more modern slickness in it's sound. As the statement above said, this new album has a much more progressive sound to it. The guitars are still very slick sounding, but more cleans have been added. Songs like Kadavergehorsam have a very polished, but rough, black metal sound with clean passages mixed in with the more traditional riffs.
While only 2 offical members of Agrypnie, Torsten der Unhold and Rene Schott, these guys recorded this album by themselves They have 2 session players for live shows, Martin and Carsten for guitar and bass, respectively. But overall Torsten and Rene pulled off an incredible sounding record. The sound of everything can be heard very clearly on here and doesn't sound overproduced.
The symphonic and industrial elements are still there. Schlaf contains a more symphonic textured sound compared to the rest of the album. While keyboards are used more for ambiance and atmosphere.
Vocally, Torsten provides a fitting sound to this band. His style is very much black metal sounding, but has the more raw sound that most of the depressive bands have. This adds emotion to this record that would otherwise seem rather corny sounding. But Torsten also adds some more death metal vocals into the mix especially on the final epic 16[485]/Brucke Aus Glas.
The overall depressive nature is not that of more of the depressive black metal bands, but more brought on by the atmosphere of the record. The keys and effects bring that sort of touch to this album. But the actual playing is beyond that of most of bands playing that style of black metal.
Guitar solos are utilized tastefully in this band, mixed in the overall sound picture, not feeling overused or overstayed. The overall sound of the band is still very much black metal even with the touches of progressive, depressive, and industrial. This could be considered a gateway band for people who are just getting into black metal due to some of the more catchy elements in this band.
Overall, this band is impressive sounding. Emotions come spilling out from this album without mercy. Definitely worth checking out for newer fans of black metal.
Overall Score: 8.5
Highlights: Der Tote Trakt, Kadavergehorsam, Zorn, 915.2, 16[485]/Brucke Aus Glas
Posted by maskofgojira at 2:13 PM