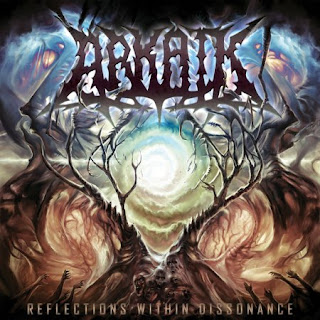 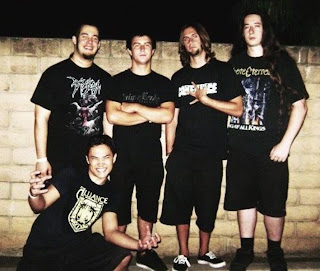 Tech-Death For Fans of Deathcore.

Arkaik is a technical death metal band from California. "Reflections Within Dissonance" is their second full-length album, and it's being released on Unique Leader Records. Being released on this label must make this band at least decent at what they do since Unique Leader usually doesn't sign a band that's crap.
From the intro track The Transcendent Spectral Path onwards, this band does not let up. Showing incredible technical prowess and capabilities. You can tell influences immediately from the actual first song, Reflections Within Dissonance. Signs shows that bands like Psycroptic or Spawn of Possession are definitely part of Arkaik's sound.
Though for anyone who's never heard a Unique Leader band, this is nothing new for the label. Being founded on the principle of signing super brutal, uber-technical, and constantly fast death metal bands. So this band really isn't all that different from the rest of the bands on that label. This band just happens to be younger.
Songs on this album are all fairly short as well. The whole album is only about 40 minutes long, so most of the songs won't take up that much of your time. Seeing as the longest song on this album, Womb of Perception, is just under 5 minutes, you could go through this album in a flash. This could be considered a bad thing, seeing as the songs mix the whole brutal death, deathcore, and tech-death together in a pretty decent way all the tracks can sometimes blend together. Memorable parts are somewhat hard to come by on this album, with very few things you haven't heard before. Plus, there are very few riffs that are even repeated enough to get stuck in your head.
While it's clear that every member of this band can play their instruments well, bass player, Eric Cohen, is the standout player on this album. His influence on songs is not usually heard until he does an Alex Webster (Cannibal Corpse) and whips out a small bass solo/break part. His performance is what gives some of these songs a little more to heard instead of spiralling around your head technical prowess that just blends into a storm of self-indulgence.
The solos heard on the track Malignant Ignorance give hope that this band can at least bring in some more melodic influences. Since every thing else on this album is blindingly fast, some melody is appreciated to those of us who don't listen to constant aggression death metal. Those small moments of melody do appear every so often on this album, but their somewhat hard to come by.
Vocals are your usual death growls. There are some moments where he'll do a squeal, but lucky enough, those moments are very few on this album. His range is the usual low and mid-range growl, he might do a few more variations than some other bands on the label, but he rarely goes out and does a higher scream or something like that.
Overall, this is decent for the style. I'm sure that there will be people who'll be able to get into this more than I could. Pick it up if you like your technical death metal with vocals that can be translated into human speech.
Overall Score: 6.5
Highlights: Obscured Luminosity, Womb of Perception, The Divine Manifestation, Elemental Synthesis, Face of Regression
Posted by maskofgojira at 1:08 PM