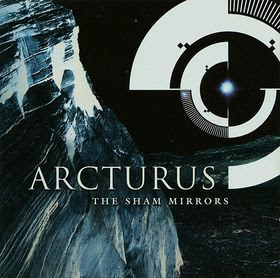 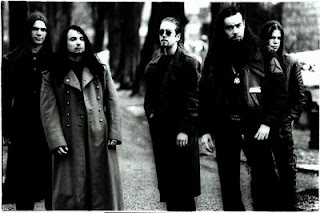 Welcome to Space.
As with every other Arcturus release "The Sham Mirrors" has a sound unto it's own and is unlike other "metal" records. Though put into the metal category, this release takes elements from genres outside of metal and mixes them together into a sound that is unlike any other "metal" sound and has not been replicated since this album.
This is considered the classic Arcturus line-up with Knut M. Valle on guitars, Tore Moren as a touring guitarist, Dag F. Gravem on bass, Hellhammer on drums, Steinar Sverd Johnsen on keys and sound-effects, and Garm on vocals. This combination at this point in time created a near flawless record. The previously spoken elements outside of metal can be best showcased in a song like Nightmare Heaven, where elements of metal, not black metal, ambient, and trip-hop music, and during the last 2 minutes, a bit of a 70's rock vibe. A hard album to put into a genre, it is usually put into the Avant-garde Metal genre or Space Metal.
The previous album "La Masquerade Infernale" featured a much more "exotic" and theatrical performance. The album featured a blend of what could be a mish-mash of the bands the members were a part of and where they were going into with Arcturus. But this album is much more "progressive" in terms of the transitions in songs and how the different styles are melded together with one another. For To End Yet Again is one of the few songs that best showcases this progressiveness in full, with strong guitar riffs, piano solos, and a big chorus.
As always Garm has delivered a very unique performance which no one can replicate. The way he layers his vocals is consistently top notch. Delivering different presentations of vocals in every song, whether the more straightforward styles on Ad Absurdum or the more meandering Kinetic. It is also well shown how he can both deliver a more bass and lower octave notes while still being able to sing in a very strong falsetto, like in Collapse Generation. A song where all of his talent is best shown is For To End Yet Again, the longest song, one with an actual chorus.
Instrumentation is performed very differently than in most metal bands, where the guitar is usually up front with the vocals. It seems where on this album, the keyboards and pianos take the front with the vocals seem to bring a melody and the guitars provide a heavier back round to the very neo-classical performed keys. The drums and bass lying in both very capable hands and prove that the rhythm section does not have to be performed techy to show technical playing. Hellhammer's technique on "The Sham Mirrors" seem to be very layed back, rarely bursting out into a black metal blast beat or long stretches of double-bass. The bass is showcased very well without being overpowering in the mix, providing the low end for an album where the bass of guitars, drums, vocals, and low-keyed piano is used a frequently.
For people expecting an electronic version of "La Masquerade Infernale" they will be sorely disappointed. This album, as already stated, rarely breaks into a heavy section. It is only on songs like the mostly instrumental Collapse Generation or the more black metal song Radical Cut with guest Ihsahn on lead vocals, where the metal is brought out. This is an album best listened to with an open mind. Prepare for the journey through space and time.
Overall Score: 10 - Classic
Highlights: Every song is a highlight
Posted by maskofgojira at 12:52 PM