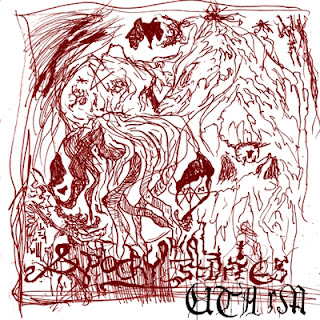 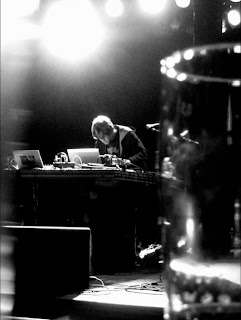 It's sort of strange when I think about how long it's taken me to write up this review for this album since it was an album I was eagerly awaiting as soon as I heard HMB was releasing it. Utarm is one of the first hybrid projects I had heard to fuse noise and black metal together, so it does hold a special place in my heart. But since you're currently reading this, it means that I finally got off my ass and got around to writing this.
In the past, I have always viewed Utarm's work to be a sort of experimental form of black metal with aspects of noise, but I guess it only hit me after listening to this record that that view has been wrong all this time. Utarm has not been a highly experimental form of black metal, but a very intense and melancholic form of noise music. Certainly it borrows from black metal, but this record, perhaps more than any other, made me think of noise music artists more than black metal ones whilst listening to the album. This album is much more of an explosion of distortion than it is of warped effects, which is perhaps what led to that shift in view. I certainly found this to be a far more intense and alienating listen than any of the project's past material, which by no means was easy listening, but this was like a new level in terms of making the album difficult to get into. Though I think it's pretty agreeable that none of Utarm's past material has been exactly memorable, there was always that through-line that really made that black metal element seem tangible and was, at least for me, an entrance into the project, I do not think that the same could be said of this record. It's just a very hard-nosed assault of "negative" emotions that, in all honesty, might be too much for some people to get into.
Being that there are only five tracks, it would be a safe bet if you came into it assuming, at least based solely on what I mentioned above, that this would blow your eardrums out through copious amounts of distortion and noise. In the case of the first two tracks on here, you actually would not be incorrect, as they are brutal and extreme pieces of extended blackened noise which could prove as torturous to some as Nattramn's vocals in Silencer. And while that doesn't change too much, it sort of peaks out on the album centerpiece, Black Light Aeon Apocryphia, where things take a slightly more avant-garde-ish turn. It isn't so much a tonal or even stylistic shift, but more of a movement into other areas. There appears to be less of an emphasis placed on sonic bombardment and more on atmosphere, and it shows through the occasional ambient break or more experimental sound thrown in during the opening moments of the track. The last two tracks then take things into a much more, and I know it's going to sound odd using this word in the context of this album but, meditative style. Things become less intense and not quite so bleak and take a more streamlined noise approach while the background is what becomes the point of interest as more and more ambient textures are brought in and taken out throughout the course of the two tracks.
This is not an album I expect people to jump right onto, hell, I'm not even totally on board with this one yet, but give it time and it will grow on you. It's a great piece of work for all those people who consider them noise fans who are too abstract for metal while interesting enough to intrigue the metal guys who are looking for something really "underground". But whatever your tastes actually happen to be, if you like intense music, give this one a listen.
Overall Score: 8.5
Highlights: Of Rape, Solitude and Bliss; The Triangle of Flesh, Above Death
Posted by maskofgojira at 7:44 PM