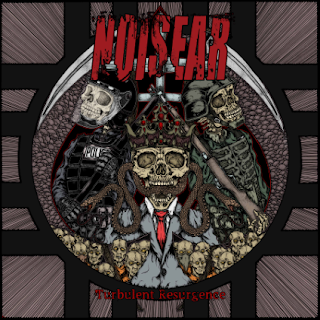 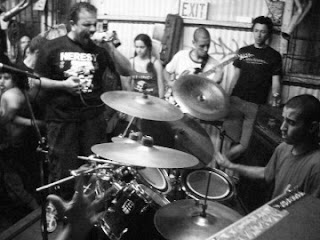 Even though it didn't wind up being on my top 50 list of last year, Noisear's last full-length Subvert The Dominant Paradigm was one of the best grind albums of last year. I know that the band is pretty productive and Dorian Rainwater has been pretty busy collaborating with the always awesome Cara Neir, but I didn't expect another full-length so soon. Though I'm not sure if one could even call 19 minutes a full-length.
After a short noise introduction, you'll get whatever grind you're needing in your ears. It's fast, it's quick (only three tracks top one minute), and it's brutal, no nonsense just all out sonic obliteration. It's honestly hard for me to come up with anything more to say that that really because it is essentially more of the same from these guys. If you don't know what you're getting yet, I'm really not sure what to tell you. I mean, they still have riffs that are catchy and spastic, drumming that is just crazy, and vocals that are all over the shot, from screamo-esque shouts to death metal growls and everything in between, it's all that in under twenty minutes. I realize that writing songs that sound different when most of what you're playing is under a minute long can prove to be extremely difficult, but that's where I've thought that Noisear succeeded. They know how to make riffs that are different enough not to blur into one another, which is a problem many a grind band has. Maybe that's more of a problem with an album's pacing than actual songs, but Noisear have that problem conquered as well on here as every song feels very separate from each other, no overlapping to be found.
There have been several grindcore albums that I've really liked this year, and this one follows that trend, not disappointing after last year's Subvert The Dominant Paradigm. I can't really say it blew me away as much as that album did, but this is still very good for what it is. If you like grind and you're not listening to this, I don't really know what to tell you.
Overall Score: 8
Highlights: Indifference, Inflated Ego, Broken Cycle, Fiery Rebirth
Posted by maskofgojira at 9:40 PM