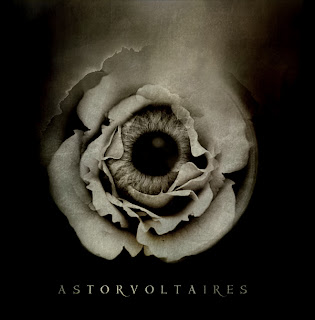 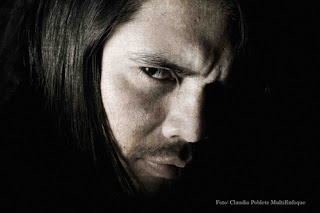 AstorVoltaires may be a new name for some people reading this site, but is not a completely new act. Those of you who are familiar with the act Mar de Grises will know of Juan Escobar's work in that band. Since leaving this band this has become the main focus for his doom metal tendencies.
To the people who know what Mar de Grises sounds like, this album shouldn't be too far a stretch for you to latch onto. The fusion of melodic death, doom, and post-metal that that band happened to combine was praised not only by many a listener, and Escobar doesn't shy away from that sound too much, but instead makes it a bit more accessible (though if you like your lyrics in English you won't get very far into this) and even a bit more progressive as well. All the traits on this record you've heard in Escobar's former band, but the songwriting is a bit more catchy and not quite so guitar oriented. Opener Rosas Y Fuego is a very slow and atmospheric track that really doesn't rely too heavily on crushing guitars and roared vocals and that may not sit well with some who like an album to get off the ground fast (not so much in speed but in the sense of things starting off heavy immediately). I'm not familiar with Escobar's musical background, but from what it sounds like on here, he is more adept at synth than other instruments because it tends to play the biggest role in the album's sound except for his own vocals. And that isn't to say that the playing on here is bad or anything, it's actually quite the opposite. This record contains some of the best guitar playing I've heard on a doom metal album this year. The guitar work on this album often bounces between typical doom metal slowness and more surprising bouts of progressive/tech metal wizardry, which was something I can't say I've heard in a long while (if ever).
Personally, I'm not crazy on Escobar's roared vocals. They sound strained and somewhat forced, which didn't really sit all too well with me, but his clean voice is very good. He manages to channel subtlety and emotion through his clean singing in almost every track he uses it on, and I do think that it is his strongest trait. Every time I get to track five, Tummasilmäinen, I swear that I think Tomi Joutsen (of Amorphis) is doing the clean vocals and have been trying to find proof of that since the first time I heard the track, but it appears as though it really is Escobar. That really blew me away because he really gives off a very different presence on other songs from this album and it didn't really sound like him at all. His songwriting is also, I think, far more consistent on here than it was on the Mar de Grises albums he worked on, meaning that I found more songs on here memorable and catchy. I'm not sure I could say that it's more diverse, but I found it more enjoyable than the majority of their work. I hate to keep comparing this album to the Mar de Grises albums that Escobar worked on, but it's the best way to I can describe getting a measure of this album's quality - but just to be clear, so far I have yet to hear a bad album from Escobar.
Aside from knowing that this was a doom metal album, I really wasn't sure what this album was going to sound like and I was very pleasantly surprised. If nothing else, I think that Escobar should be proud for making an album that doesn't conform to genre stereotypes and has a sound all it's own. I look forward to what he releases in the future.
Overall Score: 8.5
Highlights: Nexo Estelar, Tummasilmäinen, Donde Nada Existía
Posted by maskofgojira at 11:09 AM