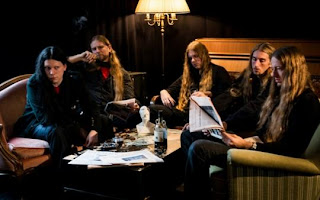 As everyone who reads this site will have come to expect, I love experimental black metal. It's easily one of my favorite "sub-genres" to listen to and it's a genre that I tend to praise. This new record from Blutmond follows their 2010 effort Thirteen Urban Ways 4 Groovy Bohemian Days, which I actually wasn't overly positive on (though I still liked it).
Even though the term avant-garde can still be applied here, I will say that this is not so alienating or cerebral and weird that it would turn off those who like more melodic forms of metal. With this album Blutmond have essentially taken on board all the weirdness and eccentricities they need to stand apart from other groups while maintaining a pretty melodic and accessible sound. Tracks like opener Putting Hearts Together or Moonlit Chair™ contain their fare share of experimental tendencies, like a saxophone solo or , but they don't veer off course into straight-up jazz or electronic sections as one might expect. The record keeps that metal sound central, not deviating enough to really break up the flow so the record never comes off as jarring or schizophrenic, you decide whether or not that's a good thing. Having said all that, I do commend the group for throwing in various genre tropes into their sound and making it all sound cohesive, with ideas coming from the likes of jazz, blues, post-hardcore, electronic, among others. Making several tracks touch upon being straight-up melodic metal doesn't hurt them either, allowing their more experimental tendencies seem all the more bizarre when put alongside a more straightforward and catchy track.
I know the above paragraph probably comes off as rather unimpressed, but on the contrary, I actually really enjoyed this album. While it isn't the most ambitious of albums to carry that avant-garde tag, I admire the band for taking on board all things that are associated with that label stigma and doing things their own way. It's an uncompromising record in terms of how it plays things to the beat of its own drum. Plus, any band that manages to make thoughts of Mr. Bungle appear in my head automatically gets bonus points in my book, and the intro to Absolution Lies In Evolution definitely got my thinking of one of my favorite Bungle tracks. While I can get off on bands being solely weird and experimental and pretty much enjoy it for what it is, if not more than it should be appreciated for, when a band can actually be quirky and still pump out some consistently good and catchy songs, they're free to count me as a member of their fanbase. Personally, I felt like the first half of this album delivered a nice aggressive sound that will definitely be enough to draw in many people to this album, the second half is where I happened to feel like the band started showing off more of their experimental side. Pretty much from Breakdown 2012 onward, the band start bringing out more of a darker and creative set of ideas. Though the most melodic track on the entire album, Attention Whore! (Lost In Bliss), it still features a bit more of a dissonant and progressive slant that made it stand apart from the tracks on the first half. It wasn't quite as straightforward, which might sound a bit odd, but if you listen to the track I think you'll understand what I'm talking about.
After my not so pleasant introduction to the band with their last album, I think they really got it right on here. They're still not quite hitting all the high-notes in my book, but they're onto something special in here and I hope they continue moving forward as they did on here. If you enjoy experimental black metal, I suggest you begin looking into this album.
Overall Score: 9
Highlights: Pas De Deux, Birds of Prey, 21st Century Prophets
Posted by maskofgojira at 10:15 AM