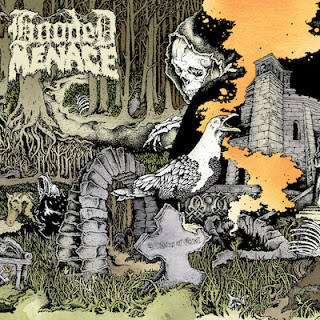 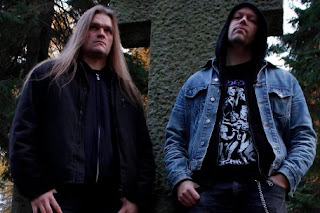 I think that Hooded Menace are a really great band who do great things for the death metal genre. They were a part of that old-school death metal revival several years back but have really turned into something special. This, their third full-length, follows on the tails of the great Never Cross The Dead album, which I absolutely loved.
Over the years, it has appeared to me that Hooded Menace have grown closer and closer to being a doom metal band over a death/doom group, which is actually quite a stupid thought on my part because even listening back to the group's 2008 full-length debut, Fulfill The Curse, the band always exhibited the penchant for doom over death metal. My assumption may have stemmed from the fact that this album feels more like a doom metal record more than a death metal one, except for the vocals. A lot of the riffs really remind me of early Black Sabbath, Candlemass, and Paradise Lost, which is never a bad thing, and the band have certainly showcased these influences in the past as well, along with the obvious inclusions of Asphyx and early Katatonia, but this album feels a lot closer to the doom genre than the band has been before. Maybe it's just me, maybe not, but that's the vibe I got while listening to this. The melodies feel even more morose and the grooves even lower, and the same could be said of the vocals as well, but the band has removed a lot of that visceral immediacy and outright brutality in favor for more punishing slowness and groove. I felt like the two were met quite nicely on Never Cross The Dead, which was slow for the majority of its running time, but knew when to speed up just enough to take things off the ground level.
Don't mistake my criticism for me disliking this album, because I certainly do like it, it just doesn't have that flair of death metal that I thought their older material had. In many ways this album reminded me of another album from a Finnish group I enjoy, Amorphis. Tracks like In The Dead We Dwell and Evoken Vulgarity really take me back to the first time I heard a release like Tales From The Thousand Lakes, or, to a lesser extent, Nespithe from Demilich. Granted, those albums differed quite a lot in style from this one, with the latter being far more technical while the former being much more melodic, and this one still being based quite heavily in grooves, there are stylistic comparisons throughout the album where I was reminded of those two groups quite specifically. Though there are certainly still plenty of melodic moments throughout this album. Maybe I'm leaning too much on older Finnish death metal records, because Hooded Menace certainly do have their own voice, but on here I didn't get the sense that it was as clear as it has been in the past. I wouldn't say it's been obscured, but more like they aren't quite saying what they want to in the clearest manner. It feels more convoluted, in a sense. Like they're trying too hard to make these songs interesting all the while writing songs that don't really go much of anywhere. The best songs on here, in my opinion, keep things heavy and relatively straightforward, they're not necessarily the shortest songs, but they get their points across the clearest and the best.
I was only mildly disappointed by this album because it doesn't stay with me in the way that their previous full-length, or even some of the tracks they've provided on splits with other groups have. There aren't many bands who do this style as well as Hooded Menace do it, even older and more experienced groups, and so even when I'm let down by an album like this, I'd still say it's better than a majority of other bands pedaling the same thing to you. It's still a very good death/doom record that is a must for all fans of the genre and certainly worth checking out if you haven't already.
Overall Score: 8
Highlights: Vortex Macabre, Curses Scribed In Gore, Evoken Vulgarity
Posted by maskofgojira at 9:55 AM