Here are some of the last splits for this year, hopefully you might find something in here interesting. As always reviewed from 1-10. 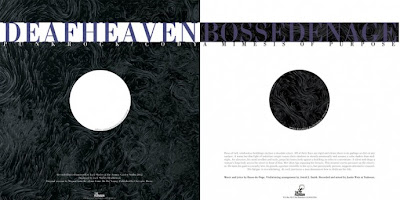 Obviously anyone in tune with the rising underground black metal scene in California will know about both the bands on this split. Both Deafheaven and Bosse-De-Nage are up-and-coming bands that have been making quite a name for themselves within the last year or two and this split sees them broadening their sonic palates (if only slightly) with this release. Both bands contribute one track each (depending on how you really view it) to the split, so, starting off with Deafheaven, we have their cover of Mogwai's Punk Rock/Cody tracks. I mean, the band stick pretty true to the way Mogwai originally did the track, though the use of wretched vocals is obviously a noticeable change. Personally, I think the band did a pretty solid job with the track, they kept it's more uplifting progressions and atmosphere without falling into simple caricature or turning it into more of a black metal song. As for Bosse-De-Nage, a band who I wasn't overly enthusiastic towards when I first heard them, I think they continue to make strides forward in their material. I'm not sure whether or not this track, A Mimesis of Purpose, was written in mind to be a part of this split or not, but it does see them honing in on their more post-rock side a bit more than that classic screamo/post-rock and post-hardcore side we heard on their most recent full-length. The track is by no means straightforward though, veering off course now and then if only to just keep the listener on their toes. It's a very exciting track that moves around quite a bit but actually builds momentum through the shifts in tone, which is very impressive. I thought both sides of this split were very well done and I highly recommend checking this out if you're into more up-and-coming "post"-black metal bands.
Overall Score: 8
Highlights: A Mimesis of Purpose

Here we happen to have two groups who released albums that really impressed me last year. Both groups really put together some really interesting releases and both wound up on my top 50 albums of 2011 list last year so when I heard that they were going to do a release together, I was pretty excited to hear it, to say the least. Starting off with Aenaon's track Er we have a nice progression from the sound they established on their debut. What that happens to mean in this case is that you have some pretty cool sounding groovy riffs with a nice jazz interlude spliced into the equation, and the band pull it off with aplomb. The track is more of an accessible piece than some of what was on their debut in the sense that the chorus is quite melodic and easy to latch onto, but the band don't make the track easy to predict with their ever-changing riffs. Stielas Storhett also takes things into a slightly more accessible direction with his track, Alter Ego. It's not quite as reliant on atmosphere as some of Damien's previous work and has more of a straight-up progressive metal sort of vibe. Having been somewhat familiar with Damien's older material in the Stielas Storhett project, it's been quite exciting to see his shift from his earlier almost depressive black metal releases to his more modern progressive metal ones. In the end, both tracks are really great pieces of work and I think this is a little release you should not pass up.
Overall Score: 8
Highlights: Er 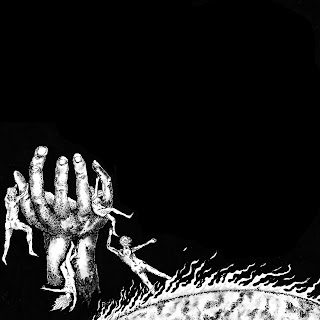 Of the three splits on here, this was the one I was the most uncertain about. I was aware of, and had heard/read the praise of False, but I was not overly enthusiastic about Barghest's debut full-length last year so I was somewhat trepidatious about this split. With their two tracks, I was actually quite impressed, as Barghest actually managed to pull off some rather well done black metal that had some nice doom and death metal influences pop up occasionally. I can't say that I thought they were amazing tracks, but I definitely found them to be more engaging than the majority of material I had heard on their full-length. I see the appeal of the band, but personally, while I do view both tracks as signs of growth from their full-length, it's still not quite enough to really keep me interested. Having never gotten around to listening to False's EP, I wasn't quite sure what they were going to bring to the table with their seventeen minute long track, but I have to say that what they did bring definitely justified that length. Their track moves through various phases of aggression, channeling various sub-genres of black metal into a single track pretty solidly. So in the end, I think that if you're looking for some solid black metal, definitely keep this little release in mind.
Overall Score: 6.5
Highlights: Heavy As A Church Tower
Posted by maskofgojira at 11:54 AM