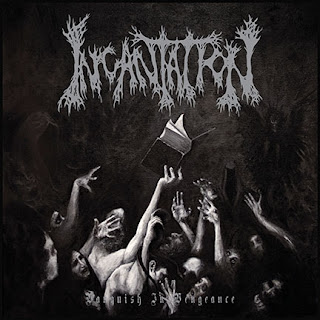 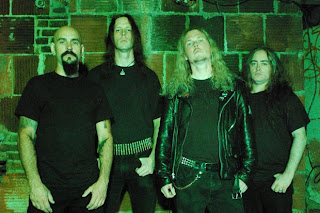 In recent years, more and more bands are taking on board Incantation influences, leading up to what some people have started to call "cavecore". But there's nothing that can substitute for the original, and Incantation have returned after six years with a new full-length. I had almost given up hope of the band releasing a full-length again before hearing that they were signed to Listenable.
What's great is that so many of these "cavecore" groups focus on the atmosphere and slowness of Incantation, and that, whether in response to it or otherwise, this album is filled with fast-paced death metal songs. This is among the best the genre has done all year, with riffs that either call back to more tried and true style of their past or the more weird and, I guess you could say, off ones that so many bands overlook in favor of sounding like they're playing in a reverberant cave. Where Incantation have always succeed is that they never relied on drenching their sound in reverb to sound menacing and atmospheric, it all came from mood and tempo shifts, demonstrated early on in the album on Ascend Into The Eternal. The riffs are great and quite memorable for the most part, which is great to hear since I can't say that I was really into the couple of full-lengths before this one. There's definitely no shortage of riffs on here, with the band interchanging riffs that call to pretty much every form of extreme metal (death, doom, black, and a bit of thrash) which is sure to please those who enjoy lots of variety in their riffs styles. This album just has that quality that made me think of the band at their prime early on in their career.
The production on here is pretty clean, but still comes across as sounding natural. It's a very unfussy sounding recording where you have each instrument in its respective place and not much else. Unlike many of the bands they've influenced (in recent years) the sound of this is not muddy or damp sounding, but very thick and low sounding. I'd say it's more representative of power than atmospherics, but that's just me. The band still balance both, the production leaned more on the band's delivery than the result of the delivery - if that makes any sense. I was actually surprised by the sound when I first played the album because I guess I was expecting the band to sort of make the ultimate "cavecore" album and show all their younglings how it's done, but that is not where the band decided to go at all. In a sense I'm relieved that they didn't go that route because it could be seen as a cash-in/sell-out move to capitalize on the success that that sound has been achieving recently, but disappointed because I would have liked to have heard the band adapt their sound to that style and really demonstrate how to do it - but that turned out not to occur. Even the doomy aspects to the band's sound don't ever really come across in that reverb heavy manner, and instead, as I mentioned above, create an ambiance naturally through their riffs and through extended and droning chords, which can be heard most obviously on closer Legion of Dis. Personally, I think I liked the sound of the album more when the band were just riffing away than when they were droning away, just because I thought that the production sound didn't mesh as well with the feedback and droning chords on that track in particular as well as it did with the faster forms of aggression, but that's just me.
While it's no masterpiece, I think it is among the band's best work, especially within the last decade. The band sound fresh and revitalized throughout these ten songs, pumping out some of their best material to date. I think that this is a much hear record if you consider yourself a death metal fan. Do not pass up the opportunity to listen to this album.
Overall Score: 8.5
Highlights: Progeny of Tyranny, Vanquish In Vengeance, Legion of Dis
Posted by maskofgojira at 9:20 PM