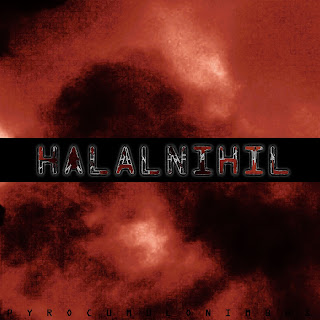 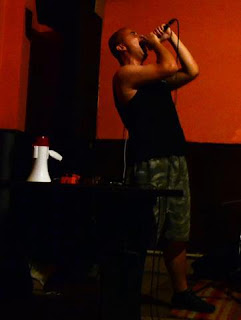 I reviewed Halalnihil's previous full-length Global Uterus Annihilation a few months ago on here and thought that it was pretty decent. Well, since then, mainman Inhos has been really busy making several new recordings. I was offered by him to cover his Freedom Destroyer EP but figured I'd just do this one because I made him wait.
Since his last full-length, Inhos has decided to forgo the black metal influence on Halalnihil and just dive into straight-up noise and power electronics. For me, I can't say that improved my perspective on the project. Though it did remove some problems that I found on his last full-length, it also managed to create a few more. I thought Global Uterus Annihilation, while flawed, had a nice set of ideas when combining intense, and at times slightly annoying, power electronics over a sort an overly distorted and chaotic black metal base, and it had a certain tone that made it feel very nihilistic and overblown, but it a good sense and I have to say that since that's been removed, the project does feel a little less unique. There are so many other projects out there that are doing straight-up harsh noise and power electronics already, and this album just didn't feel all that different. It still has the nihilistic streak that I find endearing, but it just doesn't have that sense of absolute rage and disregard for life that I found on his last full-length.
Having said that, it has to be made aware that this is a far more listenable album than some of Inhos' previous works. The noise is not so overbearing and loud that it ever becomes ear-piercing or annoying. I'm sure that might have been the draw for some listeners, but not me. Sure, a track like Humiliation For All Ages contains that high-pitched frequency that I frankly find quite annoying at the best of times, but due to the relatively short lengths of these tracks, it didn't ever get to the point where I had to actively shut the record off (also, Inhos has produced far more annoying noises in the past). On the positive side though, I did like the spoken word segments on here, Inhos has a nice tone to his voice and it fit very well during the low key introduction of a track like Prostitution Tragedy. I'd say that I'd like to hear the project introduce even more quieter or ambient moments into the music as I think when the music falls into a more silent sequence, it made the intense noise that followed it all the more powerful. Yes, that's something you can say for nearly every style of music out there, but it remains as true for this project as it can for almost any other band/project/collective out there. Even though the nearly ten minute long title-track is unabashedly brutal for essentially it's entire length, there are like one-second long stops where the noise will break and then start up again. Sure they're short and are probably more coincidental than anything else, but they work to the advantage of at least keeping the damn thing interesting for it's entirety.
I know that this review probably came off a bit dismissive and maybe even negative, but I actually don't think this album is bad at all. It's a bit less interesting than Inhos' previous material (that I've heard), but it's also more palatable to a first-time listener. I can't say it's an improvement over his last full-length, but it if you dig harsh noise, power electronics, or other stuff like that, give this a listen, you'll probably enjoy this.
Overall Score: 8
Highlights: Looking For Love Through Vomit-Soaked Values, Prostitution Tragedy, Pyrocumulonimbus
Posted by maskofgojira at 7:46 PM