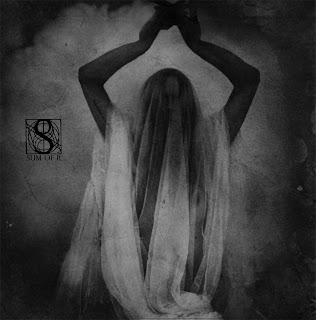 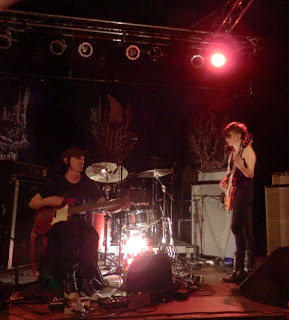 I received this a couple of months ago and was wondering exactly what kind of album it was. I knew it was a doom metal album because of the description I got along with the album, but it was being distributed (soon) by Utech, and is the first release of new, up-and-coming label Storm As He Walks. Utech doesn't put out metal albums too often, so whenever they do, it's worth looking into because it will be interesting.
Besides the fact that this was a doom metal album (yeah, like that's going to tell you a whole lot), I left myself completely open to whatever this album was going to sound like. I knew there was a video floating around of a song from the album, which I ignored, I knew there were some reviews for it, which I also ignored - for once, and I knew that from trying to find a picture of the whole band that they were a trio, aside from that, I tried to keep myself completely neutral on what I would hear. Seeing that this is quite the deviation from Utech's usual batch of releases and is the first release for a new label - which happens to be run by Todd and Crisne of Architeuthis Rex and Kapustin Yar, I did suspect that this wouldn't be the standard doom metal record, there's no way it would be with labels like those backing them. When I finally did get around to playing this thing, I can honestly say that I was surprised by the sound but somehow not totally amazed by it. And just to clarify, I mean that with the labels backing this record/band, I wasn't shocked by its less than standard approach to the genre.
The sound in particular on here is quite the treat. It's like someone took old-school doom and psychedelic rock and blended them together with some traces of krautrock, drone music, and ambient soundscapes. In a way, it's related to the whole post-metal genre, but it's a lot less reliant on a particular song format. Opener Growing Into Something Special does demonstrate that post-metal soft into loud structure, but Mist of Tears is a piece of pure, depressing of clean guitar noodling. While I know that doesn't sound like the most enticing thing in the world to hear, and personally, I'm not all that favorable towards the injections of amp noise scattered throughout the track, but the guitar lines themselves are actually quite well done. They set a mood and carry it through without sounding like it's just a soundcheck. But as you might expect, the album's highlight is quite clear, being the one-two combo of Echo/Captured Lightning. It's a track that, in my opinion, recalls the rawness and intensity of Godspeed You! Black Emperor, but compresses it into a much shorter piece, and makes use of less instruments. That may be setting the bar a bit high, but the track is good enough to at least match some of GY!BE's material in my opinion, and obviously, that's no small feat.
While I don't think it's a game changer as some other release from the doom genre this year, this is a very promising debut. I will look forward to future material from this duo based on what this album demonstrates. It's a great slab of post-modern doom that should not be missed if you're a fan of the genre.
Overall Score: 8.5
Highlights: In The Fields of Trust, Echo/Captured Lightning
Posted by maskofgojira at 9:29 PM