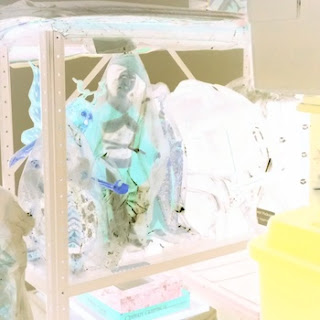 Barren Waste are a group who emailed me months and months ago asking for this review, and I am finally getting around to it. It wasn't for any particular reason that I waited so long, I just got sidetracked and more and more things came to the forefront of my attention. With that being said, the band have sent me numerous of their releases since then, but this is still the one I'll cover.
Depending on how straight-up you like your death metal, you may either think this is the most creative and inventive thing in the world, or you'll absolutely hate it. Barren Waste is a project that experiments a lot in other genres including drone, industrial noise, ambient, and more free-form ways of musical expression, so it wouldn't be incorrect if you assumed that their take on death metal was a bit skewed as well. The riffs in songs appear to have more in common with blues than death metal, occasionally breaching into what sounds like post-rock as well, while the vocals are definitely kept within the boundaries of extremeness through the use of hoarse and throaty roars and yells. Now, I'm sure that doesn't sound completely terrible to anyone, I'm sure plenty of people could dig bluesy death metal, but then there's the kicker. The entire thing is covered in psychedelic effects. Whether it be traditional phazers or flangers or choruses, among other sounds as well, it's not going to be to everyone's taste. The bass led Mirthless has some distorted chugs but you have this folky guitar melody being played over the whole thing, and that would sound odd no matter what genre you're playing in - and it needs to be said that I'm underselling it. Believe me, the rest of the EP is just as weird, with electronic beats, spastic guitar solos, and industrial noise being used in various songs along the way as well.
In the end it's an interesting piece of work at the very most, but I would like to hear more focus on songwriting than sonic experimentation. The duo is pretty prolific at releasing material and I would like to see them release a cohesive full-length at one point instead of EPs with a bunch of ideas. But if you're into bizarre sounding metal or psychedelic music in any way, take a listen to this and see if you can get into it.
Overall Score: 7
Highlights: Sky Erodes, Golden With Rust
Posted by maskofgojira at 9:18 PM