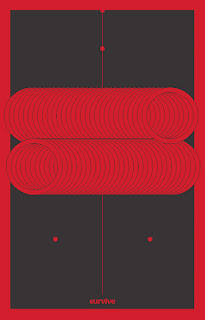 A reissue of sorts of the group's original limited batch of tapes with tracks that come from their original debut. I don't typically cover reissues but when I skimmed through it, it had some pretty nice ideas. Plus I thought the way the band titled themselves was sort of funny.
When I was doing initial research for this group, I was actually a little surprised to see that they were associated with the whole "witch house" scene. When I originally skimmed through the album, I didn't get that vibe at all. Listening through from start to finish though, there are actually clear echoes of ideas that can be found in that genre on here as well. Sure, it's not quite as navel-gazing as some other artists I've heard in the genre, and it's certainly just as indebted to ambient and 70s and 80s synth based music, but more than likely if you can chill out to the artists associated with that scene, you can find this entertaining as well. Being divided into two halves, it was actually quite nice to hear two halves that did feel quite separate from each other. I'm all for cohesion, but sometimes a release of individual pieces can be just as effective.
The first half of the tape is definitely the side that leans heavier on the witch house tendencies of other releases. It's reverbed out with smooth beats propelling the track forward and dark synth lines that provide both ambiance and the melody throughout. It's a dreamy track but one that I did find rather tiring at times. When used as background music, I found myself simply absorbing it and really enjoying what I was hearing, but when I focus solely on the music I began to feel bored and somewhat tired by it before it could even reach its half-way mark. And that isn't even to say it's all that monotonous because the structure of it is very up and down with various sections of pure ambiance, more danceable beat oriented points, or almost industrial tribal slow sections, but unfortunately that didn't help what I thought of it. By comparison, the second track feels a lot more varied. Opening up with some bubbling synths and then evolving into some low-end drones and constantly shifting textures the track soon turns from a sort of witch-ambient kind of sound into a full blown 70s-esque synth odyssey. Of course, there is more to the track than that, with plenty of droning low-end popping up quite early on in the track.
Though the first half of this did prove to be a bit monotonous for my taste, the second half really did redeem it. Both tracks are very well crafted soundscapes that could prove to be just as appealing to both sorts of crowds as they could be polarizing to them. If you dig ambient or drone based electronic music this is a music for this year.
Overall Score: 7.5
Highlights: Cschz02
Posted by maskofgojira at 8:18 PM