Indesinence - Vessels of Light and Decay (2012) 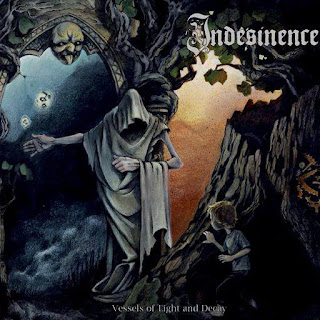 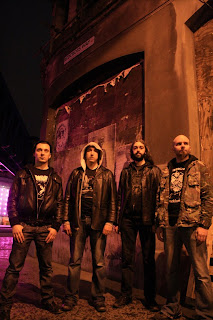 Earlier this year (and probably at the end of last year as well), I complained that Profound Lore was releasing a lot of doom metal albums and I was sort of getting bored by them. I think Profound Lore is a great label (even if they won't respond to my emails) even though a lot of what they release is overhyped (even by me). I had actually heard good things about this record from two people who weren't critics who urged me that it was top caliber stuff, so I figured I'd give it a whirl.
What do you look for in your doom metal? Do you like slow, bowl-churning riffs, occasional blasts of double-bass, guttural death growls, and humongous reverb? If you do, you're certainly in for a treat with this record, well maybe not the humongous reverb part. Aside from that though, what you have here is some old-school doom-death, the way it was meant to be played. A month or so back I reviewed the most recent My Dying Bride album and was very disappointed by how uninspired the band's songwriting was, this is the sort of album that I wish they had made. This is an album full of vitality and energy, despite being so slow. With the possible exceptions of the intro and interlude, this is a very youthful sounding album, like a young band making a record, which is sort of strange since the band has released an album back in 2006, Noctambulism (which I have not heard). I think it's sort of a tricky thing with doom metal bands to convey energy because they're playing so slowly and propelling a track forward at slower tempos can be rather arduous if not done carefully. Younger bands, like early My Dying Bride, or even early Paradise Lost records were able to convey that, and even though this is Indesinence's first release in six years, they convey a similar energy.
I think one of the reasons why I enjoyed this album so much was that, much like the early material from those old-school doom-death bands that I just mentioned, they're not so set in their ways that they have abandoned actual death metal from their sound. A track like Communion sounds exactly how doom-death should, like death metal but slower. There are so many bands who essentially just do doom metal with growled vocals, it's nice to hear a band do doom-death right for a change (or at least right in my book). Granted, I'm not going to pretend that this was the most memorable piece of doom I've heard all year, but it's definitely one of the better slabs of it. I listen to a decent amount of doom this year and I have listened to a lot of it in years past, so I'd like to think I know what I'm talking about (some may beg to differ and I welcome them to) so it really pleases me when I hear a band that clearly has a grasp of the sound they're going for and knows how to make it. A track like Fade (Further Beyond) builds so well and pretty much single-handedly leaves all the majority of other doom metal releases in the dust.
It's clear to me that this is the sort of record that gets me excited to hear new material from Profound Lore. Although I don't think it's been quite as hyped as some of their earlier releases, this is definitely one of their best this year. If you dig doom metal in the slightest, definitely check this record out.
Overall Score: 9
Highlights: Communion, Fade (Further Beyond), Unveiled
Posted by maskofgojira at 8:49 PM