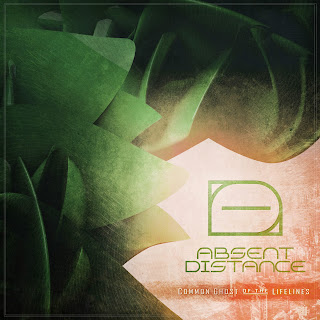 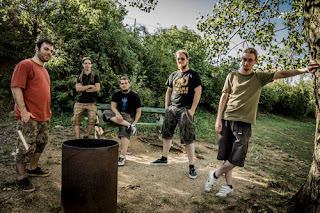 What drew me to this band was their name, I just thought it was pretty cool sounding, along with how they presented it (IE. logo). I wasn't all that interested until earlier this year they released a song with vocals on it and it caught my attention. It's also a great demonstration of metal coming out of Hungary.
I guess I'll mention it only so I can move on from it, but I did find out about this band from gotdjent.com. Now, unlike a lot of the bands on that site and a lot of the djent groups I wind up covering, this is one of the few bands who don't come across as overly "djenty". Instead of Meshuggah or Periphery worship, this comes across more in the vein of groups like Textures or to a lesser extent, Mnemic. You have the low-end grooves, but it doesn't feel quite so overwhelming or repetitive as some of those bands might give the impression of being. It feels more like those groups who were "pre-djent" in a sense because the record doesn't really have that big, overly processed sound but feels more atmospheric and natural. There's also the fact that this isn't a fast record, most of the songs are pretty mid-tempo based so there isn't a whole lot of quick stuttering rhythms. In addition to that, there's is almost no influence coming in from the -core genre, at least to my ears. You won't find a bunch of breakdowns, guttural vocals, or even chugging with melody playing just as integral a part in this band as rhythm and groove. The more the album goes on the clearer it becomes that the band is probably just as influenced by the likes of Deftones, In Flames, and Soilwork as by groups like the aforementioned Meshuggah and Periphery.
As I've mentioned before, I have lost the interest in listening to bands in the djent sub-genre who are instrumental because I have no interest in listening to an instrumental version of Meshuggah or Periphery if I already have those bands. So, what drew me into this band was the vocalist. Similar to many of the bands in the genre, the vocals on here may polarize listeners, but maybe not for the reason you may think originally. Márton Bencze doesn't have a high voice, but a lower, more baritone voice and a more mid-rangy growl. If I had to make a comparison to another vocalist, I would say his voice reminded me of Matthieu Romarin from Uneven Struture, who is another band who is quite comparable to Absent Distance. There are actually very few songs on here that make growling the default vocal style, and it's Bencze's clean voice that may prove to be the biggest hump for some to get over because it does sound a bit different from other vocalists - and if nothing else, I will say he does have his own style.
In the end I really do have to give it to the band for writing and releasing an album that is not only very well done, but quite unique in their chosen genres. It's not going to be an album for everyone, but I found the songs to be very well written with some pretty nice ideas strewn throughout. If you're a fan of alternative, groove, or melodic death metal, and even metalcore and djent, I think you might be able to find something in here to enjoy and I hope you do.
Overall Score: 8.5
Highlights: Hyperwill Crisis, Downstream, Circus
Posted by maskofgojira at 6:31 PM