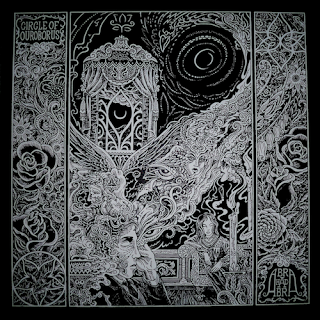 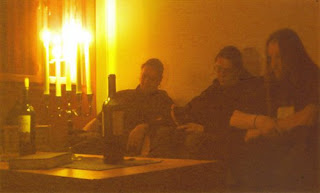 Obviously the ever prolific duo Circle of Ouroborus have released many a recording this year, with this being, I think, the second full-length this year. Among all the other demos, splits, and EPs they've released this year, I'm sure my review output for them is quite minimal, but one has to pick and choose in these sort of situations. I don't think I could write reviews to keep up with their output.
I don't know why, but based on the cover art for this album, I had expected it to continue CoO's trek into raw black metal. Because I've brought that up, it obviously means that it wasn't, it instead is one of the more aggressive takes on post-punk I think the band has done yet. The production isn't quite so hazy and murky as it has been on some of their more recent full-lengths, with the drums coming through very clearly, sometimes to the point of covering the guitar and bass lines. I'm not sure if I was disappointed by this album or not though because I sort of wanted it to be a more metallic record, similar to the route they've been heading on their recent EPs and demos. Obviously I can't say that I've heard everything they've put out recently since it all sells out quite quickly, but that's what I can at least assume from what I have heard. Granted, this does feel closer to their metal side than some of their more recent post-punk endeavors have been and I did think that was a nice treat. The album is also surprisingly diverse for one of their albums. I've found in some of their more recent work that most songs will follow a similar slow tempo, and while I have no qualms with that, listening to an album like this, which contains songs that actually are faster, just makes you appreciate that attention to album diversity more. The contrast between the sort of black metal guitar style on These Days and Years to Kill really contrasts well with the much slower and doomy style on Remembrance, and that's something I don't remember getting on the last couple of releases from the band.
I think what surprised me most about this record, apart from the sound of it, was how immediate I found it. Unlike some of their more recent work (in any format) which I have found somewhat difficult to really latch onto right away, this was actually pretty catchy on a first listen. Now obviously this was just my experience with it, but I actually found these songs to be quite memorable, which is a trait that I can't say I would apply to many releases in the group's discography if I'm being honest. I think Like Silent Meadows is one of the best songs the band has ever written. The melody on it is just so catchy and interesting that it got stuck in my head for hours (to the extent I tried to play it on guitar because I couldn't get it out of my head). But I think that the brevity of the record also helps with its charm. It's actually quite short, with tracks tending to be in the five to six minute range but sticking to pretty simplistic formulas. None of the songs go on and on, another trait which can be found in their past work, and even the nine minute closer, Dementia Praecox, manages to accomplish quite a bit without falling into self-indulgence. Personally, I think this is one of the group's strongest records to date.
I happened to think that this was a really solid piece of work and one of the bands more immediate and consistent records. I don't think it's a masterpiece, but it is probably the best thing I've heard from them this year. If you're a fan, you'll more than likely have already listened to this, if not, give it a whirl, it is a nice place to start.
Overall Score: 9
Highlights: These Days and Years to Kill, Six Hands, Like Silent Meadows
Posted by maskofgojira at 2:41 PM