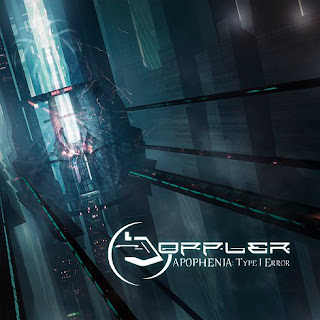 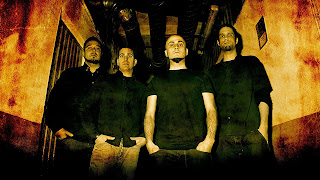 This was one of those albums that I just happened to stumble across one day and thought the cover art was pretty interesting looking. Based on where I did stumble across them, I had half expected them to be more in line with djent. I can tell you that if that throws you off, have no fear, because that's not ultimately what wound up on here.
Truthfully, it's sort of become a kind of worrisome process when I happen to find a band that's called "industrial metal" because of where djent has taken the metal genre in the last couple of years, industrial metal could essentially be a djent-by-numbers band with some electronic ideas thrown into the mix. So when I first decided to listen to this, because of where I found out about the band, I was expecting something in that area, and actually, it wasn't too far off. Granted, this is not a typical djent band and is surprisingly closer to Fear Factory than Meshuggah, but there are still come of those djent influenced breakdowns here and there. It's not going to wind any medals for originality or uniqueness, but opener Pareidolia actually did a good job at setting the tone for the rest of the album. It's groove based for sure, but the tone of the guitars and the atmosphere of the entire record give off that sort of late 90s and early 00s industrial metal, and I do mean that in a good way. The electronic elements aren't actually as overwhelming as they very well could have been, and have been in several experiences, and I did think that was a good decision on the band's part for choosing to not drench the record in trance, rave, and house synth sounds.
I have to mention the use of guttural growls on here though because I was actually taken aback when I first heard them on Asynchronous Forms. I'm certainly not opposed to them, but anyone who looks around at this site will be able to figure out that I'm not exactly a huge fan of bands that make use of them, but when used in moderation, I don't have any problem with them. Frankly they happen to lie on the border between deathcore-esque pig squeals and brutal death metal gutturals but I wasn't overly annoyed by their presence because they weren't overused. However stylistically, as the album progresses, the album does begin to show more and more of a deathcore kind of vibe, which I have to say was kind of disappointing. I can deal with the vocals, they're not really my cup of tea but they're not overused, but the over reliance on some of deathcore's rather insistent breakdowns I did not enjoy. A song like The Delivery and The Giant would have been pretty damn good until it decided to veer off into more -core influenced territory during it's conclusion. However, the Falling trilogy of tracks that close the album definitely show a lot of potential for not only experimenting with slightly more progressive ideas but also letting the instrumental portion of the band take the lead for longer breaks of time. This is the direction I'd love to hear the band continue down in the future.
I think that this is a pretty solid debut. It's not perfect, but as far as modern industrial metal releases go, it's definitely worth looking into if you're into that stuff. Fans of industrial metal, deathcore, math metal, and maybe even metalcore fans will dig this (so pretty much if you like modern metal).
Overall Score: 7
Highlights: Asynchronous Forms, Falling I: The Jump, Falling III: The Current
Posted by maskofgojira at 7:59 AM