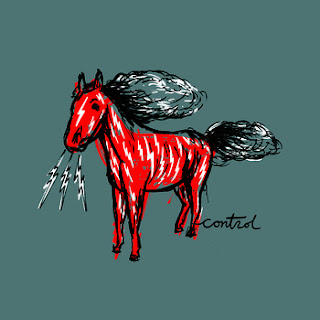 Earlier this year I did a short little review for Control's previous EP, Schulte, A, and was pretty impressed with it. Despite not really being a huge math rock guy, I did think what the band was doing was pretty cool. So when I was sent over this new EP I was certainly more eager to listen to it more immediately since I was aware of how much I already liked the band.
Right from the get-go, this new release had already surpassed my expectations. While their previous EP was good, it was more in that math rock vein, as style that I don't have the greatest of fondness for - though it's by no means a bad style, where as the four tracks that comprised this release had that same sort of precision, but, I thought, were a lot more fun. It's a little bit heavier and not quite as difficult, in a sense, to get into. It also appeared as though the band were breaking out of their comfort zone as well, experimenting with elements of fusion on RE - I'm Freaking, more-noise rock on Same Clothes Same Time, and even a little bit of psychedelia on Horn, as well during a couple of points on here as well. Maybe not enough to really consider it a major draw, but certainly a nice little treat. There are plenty of other one-note math rock bands playing it safe, these tracks prove that the band are worth keeping an eye on. Each track was entertaining to listen to and I happen to think that it's quite the improvement from their last EP and can only hope the band continue to experiment like this in the future.
While it's not the most original thing I've heard from either genre, the band do a very good job at making each track fun and enjoyable. There are enough bands trying to do serious music, and while I'm sure these guys are serious, the four songs on here at least sounds like three guys are having fun playing these tracks. If you're into math rock or noise rock, check this EP out.
Overall Score: 7.5
Highlights: Same Clothes Same Time, Horn
Posted by maskofgojira at 12:12 PM