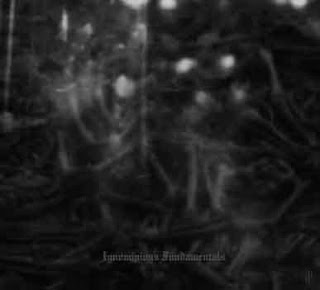 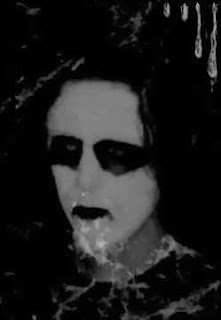 I've said several times in the past that I really love the French black metal scene and I think a great number of interesting groups come from the country. But then there are those who prescribe to the whole early-to-mid 90s Les Legions Noires mentality (sonically, not ideally). I'm not huge into that sub-culture/genre of the genre, but Dark Opus sounded interesting enough on paper to make me interested.
If you come into this expecting anything resembling the experimental, you'd best look elsewhere because you will not find it here. This is one of those records where once you press play, you are assaulted with tremolo picking, wretched vocals, and a big atmosphere. Luckily, each of the three tracks on here does have it's own personality, with opener Poisonous Shapes being a pretty mid-paced track that is directly followed by the far more intense and boisterous Crawling Barillus, which is a pretty much what anyone who listens to black metal would expect. Closer Insidious Curse is a nice blend of the two ideas, the more mid-paced atmospherics and the blazing aggression, and is easily the best track on the release because of it. It's not the sort of track that will take the world by storm but there's a few nice ideas sprinkled throughout this track that hopefully acts as an indication for where the project might go in the future. But it isn't overly raw, you are able to hear quite a lot of what is actually being played on here. It's by no means as raw as the Les Legions Noires, but there atmosphere that surrounds this recording is slightly reminiscent of some of the groups that I have actually heard.
Each track is pretty solid, so there really isn't anything to hate about these songs. I'd be nice to hear something a bit more individualistic coming from the project, but for now, this is just fine. Sure, it's nothing a black metal fan won't have heard before, but if you're in the market for some more traditional black metal, maybe try this one out.
Overall Score: 7
Highlights: Insidious Curse
Posted by maskofgojira at 10:26 AM