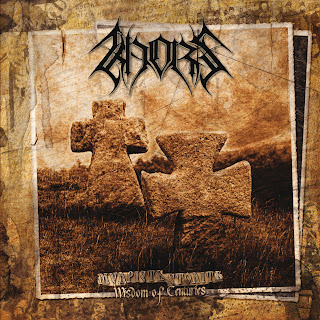 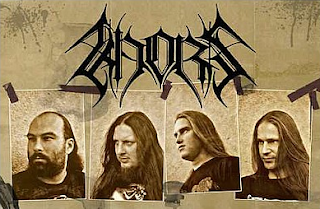 I've vented my frustrations at the Eastern European metal scene (black metal more specifically) so I'll try to contain myself here. But in the pantheon of good bands from that area, I do regard Khors to be one of the better ones, if not among the best from that area of the world. I really enjoyed their 2010 album Return to Abandoned so I was really interested in where they would take their sound next on this album.
I'll get my major complaint about this album out of the way first. This is an album with eight songs, and four of them are instrumentals. I don't have a problem with instrumentals, but I just think that it's a waste when you have a band who are so capable at writing songs to simply put out instrumental tracks. Maybe it's just me, but the inclusion of four instrumentals (two of which being the intro and outro) on an album so short is sort of disappointing. Even if the four major songs are quite lengthy pieces for the band, I found it a stumbling block that I was not able to overcome. With that being said however, all of the instrumentals (interlude or otherwise) were very well done and quite well crafted. The band have reigned in the more synth based elements from their last album and have developed their more progressive guitar melodies, which I actually think is an improvement on their part. Tracks like The Last Leaves prove to be more effective due to being the middle ground between more traditional black metal playing with the occasional progressive guitar riff thrown in to spice up the mix. I happened to think their blend was quite tastefully done.
In the context of where they're from, the Ukraine, I have always thought that Khors were up there with Drudkh, Hate Forest (and it's offshoot Blood of Kingu), and Astrofaes in terms of actually being quite proficient in all aspects of their sound. This album features all the quality elements that I've come to expect from them including some well suited clean production, nice atmospherics, clarity in each instrument, and a polished sense of songwriting. None of it feels rushed or simply thrown together haphazardly - which is more than I can say for many of their peers in the same region of the world. There's also a sense of pace that the band have, especially in regards to this album specifically, where each song feels like it has a place. I know that contradicts with my first statement about questioning the use of having four instrumentals, but my gripe is more with the there being just as many instrumentals as actual songs rather than them being any good or fitting in with the album. But the band know how to keep an album interesting to their listeners by having songs that are more straightforward and aggressive but also having depth, hear Black Forest's Flaming Eyes and The Only Time Will Take It Away and you'll hear the difference.
I thought this was a really well done piece of work that stands tall with the rest of their discography. Though this review is coming pretty late into the year, I still think that it's worth your time if you may have missed it. Black metal fans take notice, because this is not a band you want to look over.
Overall Score: 8.5
Highlights: Black Forest's Flaming Eyes, The Last Leaves, The Only Time Will Take It Away
Posted by maskofgojira at 1:59 PM