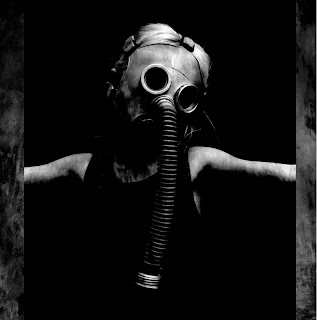 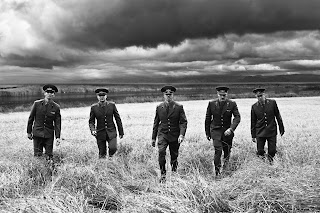 Drottnar are a group who I remember finding something like two years ago when I was really looking into the experimental depths of black metal. Their one full-length album at the time, Welterwerk, was a really unique piece of work that did stand out in comparison to many other groups. I hadn't heard much after finding them so I sort of just forgot them until I saw this new album.
If you ever wondered what it might sound like if a black metal band embraced ideas by early Cryptopsy or Spiral Architect, look no further because this is your band. I have to say that the first couple of times I listened to this band, and then when I found this album, it took me several times to try and keep myself contained and focused. The music on here is actually pretty structured, but the riffs dance around between being dissonant and very mind-numbing and harmonically interesting and pleasant, and my first reaction to it was to simply turn it off. It's the sort of thing that I found rather hard to take in long doses because I would just get headaches from it. But, perseverance paid off because after several listens, I did find myself able to make my way through the album and really enjoy each song; and that's great because each song has a very distinct personality and concoction of ideas that is actually pretty interesting despite adhering to a pretty traditional black metal set of songwriting rules. You will find blast-beats, plenty of tremolo riffing, and shrieked vocals throughout the entire record, so it's not like it's a foreign sound or set of core influences. In a way, this record is not so different from Mayhem's Wolf's Lair Abyss EP, though this is obviously better produced and much more technical, but the line of lineage can be seen.
Once you can get past the initial off-putting sound, if you find it to be off-putting that is, it's the songs that actually keep you. Opener We March is a great track that really sets the tone for what is to follow. It's fast, features a really cool and interesting main riff, and sort of throws it's weight around as much as possible in its short three minute burst. These are all songs that are short and move quickly, so don't expect any long or draw out instrumental phrases on here - there are none, and that's sort of what I like about it. It completely serious from start to finish, and it's the sort of record that makes it's point known in it's opening minutes so if you don't want to go with it, you don't have to, but if you do, you get a real treat of some excellent songs. I also give props to the production as well, it's nice and crisp sounding but also very loud. That great because it really brings out the riffs and it's been a while since I've heard a black metal record with this much dissonance actually craft riffs that are memorable. Despite that, the bass is audible throughout. I wouldn't come into this record expecting depth though, it's pretty much guitars all the way, there's some keyboard on a couple of track for emphasis, but this is a record the guy who's pissed off and wants to go punch people for half an hour. I will say that after you've endured about twenty or so minutes of this, the effect does start to wear off - luckily the album isn't all that long.
If you want to hear a dissonant black metal record that doesn't feel too indebted to what groups like Deathspell Omega or Blut Aus Nord have inspired this is for you. I think that for those people who are a bit sick of bands ripping them off, this might be up your alley. Also check this out if you happen to just enjoy really frenetic and aggressive black or death metal.
Overall Score: 8
Highlights: We March, Soul Suburbia, Ersatz
Posted by maskofgojira at 5:32 AM