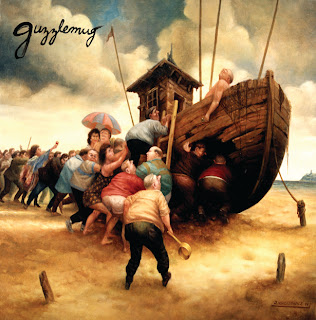 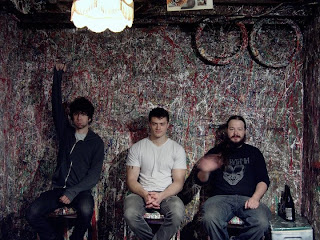 It was only a couple of months ago that the group known as Guzzlemug first came to my attention. I was pointed in their direction thanks to a release by the name of Nervously Counting Rosary Beads which I was told was quite good (and they were correct). I never got around to doing a write up for that release but I figured that this newer EP was well deserving of one.
To be frank, this four song release really swept me off my feet. Although I had heard that aforementioned single before, I found this to be a completely new experience all together. The trio really have a sound that is hard to put my finger on, it's definitely rooted in progressive and jazz rock for sure, but there are ideas that also come at me as strange abstractions of ideas found in metal. There's definitely some Neurosis in there, as well as a little bit of Enslaved here and there, but it's definitely not something that is immediately noticeable - if they happen to be there at all. Essentially, there are two tracks on here, with an intro and interlude which are by no means throwaways as they help break up the more psychedelic ideas found in the two larger tracks. Dust On My Tongue is a long, winding piece of progressive rock that is one of the most refreshing takes on the genre I've listened to recently. The band take well worn traits from the genre and really breathe new life into them. The drumming is bonkers while the guitar work is psychedelic and bluesy, with bass and synth work providing a nice grounding in between. The second "real" track is closer Io which is closer to the metal side of the band. It's an extremely weird blend of sounds as the track opens as it's both warmly beautiful and aggressively dissonant. It's like the Dillinger Escape Plan with less distortion and vocals.
This is a great piece of work and should not be missed. I know plenty of people are doing their end of year lists, but don't miss out on this one just because it's late in the game. It's truly a stellar piece of modern progressive rock/metal. Highly recommended.
Overall Score: 8
Highlights: Dust On My Tongue, Io
Posted by maskofgojira at 2:11 PM