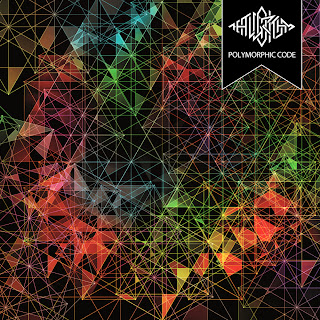 Originally, I wasn't going to cover this album. I really didn't have much interest in the fusion of various electronic genres with djent even though I did think that the idea was actually pretty interesting. It wasn't until I was actually messaged by some people who told me they'd be interested in my thoughts on this album that I decided to go forward with the review.
Personally, I'm pretty picky when it comes to electronic music. Anyone who skims through this blog will realize that I enjoy a wide assortment of metal styles, but I don't really cover electronic music all too often (even though I am a fan). The idea of mixing electronic music with the mechanical rhythms of djent I thought was a pretty cool idea and had the potential to be really interesting and unique if it was done correctly. I was somewhat familiar with The Algorithm before deciding to cover, or even listen to, this album because I had heard a couple of his early releases and thought that they had some decent ideas on them. I just sort of lost interest after a while and didn't think much more about the project, even when it was announced that they had been signed to Basick, I was still in a state of indifference and didn't really care too much to stay interested in what was going on. But like I said above, a few people did ask me for my thoughts on this album so I did check it out, and you know what, it isn't half bad.
Sure, in terms of the metal element, if you've heard one song from the album, you can essentially figure out how it's going to be used throughout the rest of the album, but the real interest is how it's combined with the electronics. Since this was the brainchild of a producer and programmer, Rémi Gallego is very skilled at adapting his sound to different forms of electronic music. He manages to find a way to blend those metallic "chugs" into everything from the wubs of dubstep in Bouncing Dot to the spastic glitches of Access Granted - which happens to veer into both grindcore and reggae as well, and I think that's an impressive feat. It's not all for me, but I can appreciate how he's at least trying not to limit himself. I'm not too much of a club guy so I don't really dig the pulsing four-four house beats or the bass wobbles of dubstep, but in the context of this album, they're fine and I can tolerate them. They're also used rather minimally as well, you'll hear an idea in one song, maybe a little bit in another later on, but most ideas aren't actually repeated on here. But then there's the traits of electronic music that I do like. That spastic glitchy stuff I dig from time to time, I can get into the 8-bit synths on a track like Logic Bomb, and I'm certainly not opposed to any IDM influence that has seeped into these tracks as well. Frankly, I'm not sure that Panic needed to be twelve minutes long, but it's the sort of track that will appeal to those who didn't enjoy the more metallic excursions from the seven previous tracks.
I actually wound up enjoying this more than I thought I would. Sure, there are elements to the project's sound that I'm just not a fan of, but this was a lot more creative than I had anticipated it being. If you're a fan of experimental electronic music or maybe really eccentric forms of metal (though I may be pushing it with even that) than I recommend you check this out.
Overall Score: 7
Highlights: Trojans, Access Granted, Warp Gate Exploit
Posted by maskofgojira at 12:26 PM