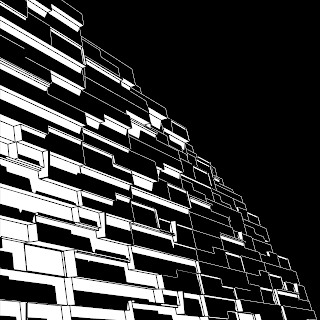 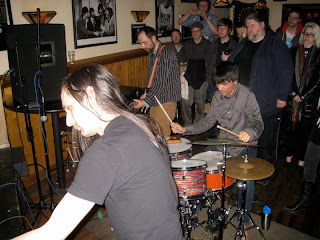 When I first received this album I was told that it was a blend (primarily) of noise and free jazz. That combination was enough to get me on board with whatever they were doing simply because of the names they were compared to were quite interesting. However, those descriptions gave no indication of exactly what this album would end up sounding like as I soon found out when I pressed play for the first time.
The idea of noise music and jazz combining is not a combination I tend to ever think about, but it's a combination that I'm well aware has been experimented with here and there. I can listen to noise on its own, and I can listen to jazz on its own, I do have some trouble listening to some of the more abstracter forms of those genres like HNW or free jazz, but it's fine because in my own listening habits they rarely come up. So when I finally got around to listening to this I have to say that I was really shocked when opener The New West concluded and I had absolutely no idea what had just happened or what I had just listened to. It was so bizarre because I heard some jazzy drumming, but whatever the other instruments were doing was a mystery to me because it just sounded like they were trying to make a sort of soundscape, but not really trying to make a "real" soundscape. It was just really, really odd. In that bio I mentioned above there was also mention of Musique Concrète, a genre I don't particularly enjoy listening to because of how tasteless I find it. So, I take no pleasure in having to say that this thing the closest thing I found this sounding like most times was Musique Concrète. It's just so abstract that I found it really inaccessible and hard to tolerate, but that may be the point.
It's the sort of album where I guess I could see the appeal to people who enjoy really thought provoking and heady music (which I do enjoy) but I could also see the appeal this would have to uber pretentious art students who like it just because it's so inaccessible that they can offhandedly mention it to people in conversation just to show how intellectual they are. Now, I don't think that the music itself is inherently pretentious, but I do believe that the way this album came out sounding does lend itself to that, unfortunately. I just could not get into the soundscapes these guys were creating because to me, if you're going to do that, do it all the way, not half way. If you're going to go jazz fine, but don't use it as an intermediary point to break up the soundscapes you're making. It just seems contradictory to me and it sort of defeats the point of trying to craft a soundscape. One of my favorite bands in the world is Mr. Bungle, and the broke songs up with various ideas, but they kept it interesting because they always adhered to the idea of making songs and not just soundscapes, even during their most abstract phase. Groups like Swans or Godspeed You! Black Emperor, who I believe are comparable in some way to this album as well, carry the same trait in their music. In keeping things restricted to crafting actual songs, and I guess that's where my ultimate problem lied with this album, there aren't any songs, it's just a bunch of half-done soundscapes.
I know that there are people out there who really enjoy this sort of stuff, and more power to them but I found this to be an incredibly hard listen to sit though and remain patient with. It's not that these guys don't have talent, but it's that what they're playing is even too abstract that it just starts to try my patience. If you're a fan of experimental music of any sort, check this out, but don't expect it to be an easy listen.
Overall Score: 6
Highlights: Voided, Amalia's Regret
Posted by maskofgojira at 8:22 AM