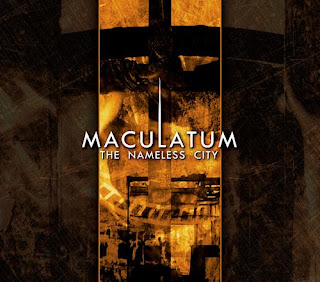 Based on the cover art for the record, I half expected it to be a metal album. Though, I guess I should have known since it was being released by Malignant, that it wasn't going to be what I expected. Though, after listening, I can't say if that was a good or a bad thing to come into it expecting.
Having never listened to the work of Collapsar or Rasalhague before hearing their collaboration on here, I can't really say what came from either one of them but what I can say is that was one of the more interesting pieces of industrial ambient music I've heard recently. Technically, I guess I couldn't say that it strays from the norm in terms of its style, you get all the low-end drones, effected voices that dance around in the background, large spaces of ambient noise, and the occasional industrial sound coming in from the background, but I guess it was all how it was composed. The way the ideas were put together formed a rather odd amalgamation of soundscapes. It wasn't quite disturbing, but not quite foreboding. In a sense, it sort of made me feel empty. Frankly, I'm not even sure how I'm responding to this album. In the past, I would regard that feeling as failure on the album's part, but for this style of music, it's hard to say that that might not have been intentional.
There are ideas in here that I thought were really well done and separated the project from the dozens of others out there that I've heard. The use of a more tribal oriented style of playing on the percussion I thought really brought a unique flavor to the record that I haven't heard done before. It was probably my favorite part of the entire record to be honest because the way it was programmed and played made it have a sort of electronic kind of vibe that fit with the overall mood of the album but the style in which it was being played kept things moving and rolling along. Things would change in the background but the beats would keep playing and it would seem so much more fluid than a regular shift in tone, probably best demonstrated in Part III. Even the latter half of Part V makes use of some excellent percussive programming and playing. The more straight-up ambient noise/industrial ambient segments are perfectly fine and well done, but don't have any of the panache or verve that those more percussive segments have.
I think that this is a solid piece of ambient experimentation but I'm not sure that I feel as connected to it as I would like to have been. I'm certain that there will be a lot of other people out there who will totally get this and think it's the best thing ever, but for me, I was split between being really captivated and really bored. If you're interested in hearing some rather well done ambient or industrial music, I'd definitely say to check this out because it's worth hearing.
Overall Score: 7
Highlights: Part II, Part V
Posted by maskofgojira at 5:08 PM