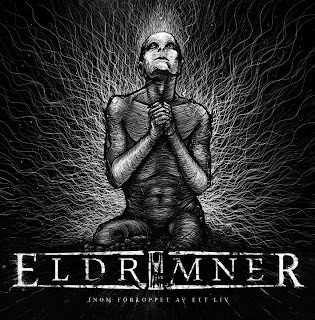 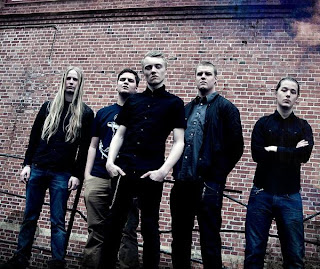 I had seen this album a couple of months back and had been going back and forth as to whether I wanted to even listen to it or not. I guess the thing that pushed me over the edge was a comparison that was made that said this was like Shining (Swe) doing Meshuggah. Personally, I think that's an interesting fusion of ideas.
I know the idea of black metal with groove more than likely won't appeal to a large amount of people, but to me, it was a sound that intrigued me. There are a fair amount of black metal groups who do embrace groove as a part of their sound, Shining actually being one of them, but I was curious what a band who took the atmospherics and darkness, and maybe even the vocal styles, of black metal and applied them to a more groove oriented style of songwriting would sound like. Suffice to say, that the comparisons made to the two bands above may have been overestimating the style on this album. Saying that a band sounds like a combination of Shining (Swe) and Meshuggah, at least in my book, would set the bar pretty high, and even though I wouldn't exactly be able to formulate a clear sound for a band actually doing that style in my head, I would be able to hear a very general sound in my head. This album does take elements from black metal and more groove oriented metal (though to say it's djent sounding would undermine what is actually on here), but after listening to it a couple of times, I can say that I don't think I would have made comparisons to the above bands. The band do borrow from more than the above styles though, with just ideas coming in from post-metal/rock as well as metalcore.
This album is actually quite an interesting little piece. The entire album is constructed as if it's a single, long song where each track flows into the next, and seeing that every track on here is actually quite short, I think that it actually works to the band's benefit. It would have been interesting to hear an album of songs, but to the band's credit, they do pull off this sort of flowing songs pretty solidly. While the majority of the album is pretty heavy, I happened to think that the band pulled off their mellower spots pretty well. They didn't abandon atmosphere, dynamics, or even melody in favor of groove, which might come as a bit of a surprise to people who might have thought that this would be all groove and blast-beats with no substance holding them together. While I'm not completely sold on the clean-ish vocals on Plågor För Glädjen, I thought that the entire post-rock section in which they were used was otherwise really well handled. The short acoustic track Mitt Sista Kapitel is especially worthy of note, and praise, for its downplayed songwriting which sort of reminded me of early Opeth records.
For a debut full-length, I think that it's a solid effort, though not without its flaws. The ideas are there and I think what I'd like to hear more of in the future from these guys is just more focus on songwriting, but that's just me. If you happen to be intrigued by the idea of blackened groove metal (or whatever genre tag it'll come up with) as I was, look into this.
Overall Score: 7.5
Highlights: Livsflykt, Ditt Sista Andetag, Plågor För Glädjen
Posted by maskofgojira at 2:27 PM