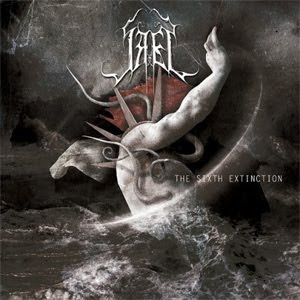 They Passed Through What Was Once Unknown.
Sael is an experimental black metal group from France. Since forming in 2002 the band has contained members to make them a super-group of sorts. Their critically acclaimed debut 2007 EP "Ocean" showcased a lot of potential in a rough sound, three years later and it's obvious to see how they've improved.
Members that comprise Sael come from both forward thinking black metal groups like Odem Arcarum, Secrets of The Moon, and Asmodee as well as from power metal group Heavenly. The combination of power metal and experimental progressive black metal is a bit odd, but thankfully the sound comes no where near the sound of power metal. What this album is comprised of shares a common ground with the experimental black bands above, bringing the extreme nature of straight ahead black metal as well as bits from prog rock, symphonic and ambient music, and a even a bit of doom metal. In fact, the member that comes from Heavenly is the keyboardist, who doesn't even add a power metal flair to this album whatsoever.
Each track on here does possess it's own unique sort of flavor, have you, within the mood and atmosphere surrounding it. Each track does shift around into different forms through each of their paths, but an atmosphere remains very translucent through it all, keeping a track centered. Some tracks, despite them all being very dark and angry, still manage to keep an almost emotional quality within them, Priest of Nothingness seems, in comparison to the opener, Being Judas, more upbeat for some reason, while Inner Wrath is the darkest and most menacing track on the album.
For some reason, maybe it's the influence of prog rock, but each member's performance on here has a more proggy feel to it. It could have something to do with the stunning guitar solos that are used fluently throughout, or the occasional jazzy breakdowns, or the well executed tempo shifts, it just seems more proggy than many contemporaries seem to be. The use of piano and organ is the main source of, audible, keyboards used on the album and they really do set a more sombre mood to the entire disc. Even the vocals, which for the most part are harsh and feral sounding screams even breaking into a few Garm-esque cleans within a few select parts of the album.
Overall, this is a very well done debut full-length album that shows a ton of potential as well as growth. From their 2007 EP to this album, a large amount of growth has been paid to both songwriting and instrumental craft. Anyone that loves experimental extreme music, this is a must for this year.
Overall Score: 9
Highlights: The Venom, Mantra of The Fourth Age, I Searched For The End of The Spiral
Posted by maskofgojira at 6:00 AM