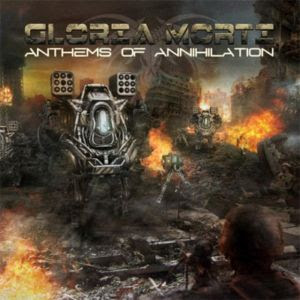 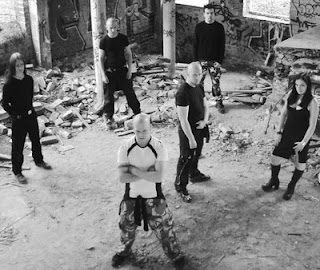 War, Destruction, Chaos, But Then What Hasn't Been Covered Already.

Gloria Morti is a melodic death/black metal group from Finland. This is third full-length record and follows in a similar vein to their last one. The band have become known for their stage show and having toured with artists like Zyklon and Dissection.
Stylistically, the band juggle elements of black, death, and thrash metal with hints of symphonic textures and persistent melodies. The entire sound is very layered and creates a wall of sound throughout this entire full-length. This is also an album where, for the most part, songs are played fast and rarely slow down, something I find a bit boring and something that just has an air of sameness and little diversity. There are some parts on here where the music does slow down though, mainly during the instrumental Swallowed By Defeat, but here and there it does come up again.
The instrumental side, while maybe not as varied as my liking, is still proficient at writing some good riffs, hear The Final Framework. The keyboards on here are used for more atmospheric texturing, but are quite clear in the mix, bringing an air of almost mid-period Dimmu Borgir vibe to a few of the songs. Later tracks on the album really have a more atmospheric touch to them than earlier tracks would lead you to believe and such are made into the best tracks on here.
I, personally, found the vocals on this album a bit annoying, but that's just me. His vocals on here are pretty much a nicely varied, but the tone is just on that I found unappealing, especially his high screams, like in the otherwise great track Obey. Thankfully, the vocals tend to stay in the mid-range yells and lower growls for most of any given track.
Overall, this is an alright album with some decent riffs and songs, but nothing too great or amazing. Fans of this band will have already picked up or listened to this album and formed opinions so this doesn't really matter anyway. If you like melodic extreme metal, check this out, but otherwise, this isn't something that you should really concern yourself with.
Overall Score: 6
Highlights: Awakening of A Discordant Machine, Cut From Gaia , Chaos Archetype
Posted by maskofgojira at 10:52 AM