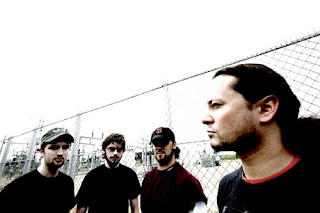 They Make What Others Do Seem Easy.
Lyzanxia is a french thrash/groove metal band. The band have steadily grown with each album, this being their fifth, and have become one of the most consistent bringers of modern thrash metal. Despite their growing profile, they are still very much an underground band thought.
The band's approach to writing music and creating a style involves a sound that, already mentioned puts them into the thrash and groove metal genres, but uses a lot of melody and never really goes too fast. The music on here is dynamic, it doesn't overwhelm with fast songs or riffs, but goes at a more mid-tempo approach and using some more melodic death metal influences at times, Separate World. There is also a lot more focus on catchy choruses on here, which is effective in a lot of songs, giving you quite a memorable hook to latch onto. This is probably Lyzanxia's most accessible release due to the use of more memorable melodies and choruses.
Vocalist/guitarist, David Potbin, has a different style of singing and screaming that could potentially turn some people off. He uses a style that involved shouting and a strained type of singing, often layered on top of each other, that feels a bit more unique than vocals that I've heard from the melodic death metal or thrash metal genres. The occasional growl is used on here as well, but sparingly throughout.
This record should be able to appease those that felt that two of the members joining industrial rock group One-Way Mirror on the side could have been the end of this band, but this release shows them at possibly their best. Though that project may have just been a way to stretch their creative muscles and bring in a new take to writing this album as there are several newer and/or fresh moments on here. Certain tracks on here use more textural synthes in the background or just focus on atmosphere, hear slower tracks like Mind Tracker or Hundred Story Moth.
Overall, this is an entertaining record that has a lot of solid tracks worthy of more than a few repeats. This isn't the most unique or technical thing out right now, but the art of songwriting is there and that is used effectively. If you like melodic and groovy thrash metal, check these guys out.
Overall Score: 7.5
Highlights: Under Lie, Parasitic Growth, SubHero Zero
Posted by maskofgojira at 12:39 PM