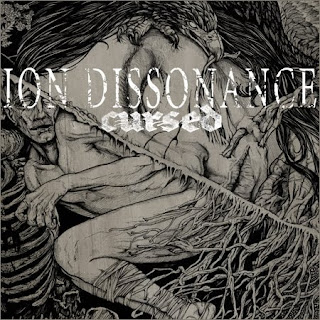 Ion Dissonance are a tech metal/mathcore group from Canada. The band originally formed around 2001 and were praised for their almost Dillinger Escape Plan approach to music, in a technical aspect. Their 2007, "Minus The Herd," turned many off due to the change in direction and including more grooves in songs, after a short hiatus, the band have returned with this album.
For anyone that enjoyed those elements of groove that were present on the last album, this album will disappoint you. As soon as You People Are Messed Up begins, you are hit with an instant surge of technical and spastic sounding riffs that are just filled to the brink with some sort of adrenaline. Despite being a technical explosion, I guessing they're using 8-string guitars here, the low end is just so powerful that it does cut through even the more frenzied moments.There are still moments of breakdowns on here though, or moments that are similar to them, so if you wanted that -core element to still be in here, you can still mosh.
The vocals on here still recall that -core sound as well on here as well, which at times can be the only drawback on a given track. There are times where the music is just punishing and crushing, but the vocals don't really provide that same brutality, but that's all perspective. One thing that can be said for the vocals though is that they sound pissed and angry for sure, no one on here is trying to act tough, this sounds real.
A lot of the songs on here are short and fast, be sure that things rarely slow down on here, a good portion of the tracks on here are under three minutes. With such short song lengths and the intensity on every song, it can become a bit difficult to tell the difference between one song and another as the record progresses, some of the shorter songs especially are hard to pick out. If you can approach this record with the intent of not finding something that is uber catchy or melodic, if you're being short sighted about it, then you can find an intense record that will surely give you that rush you want. Possibly the only song that comes close to having melody in it is the album closer, Pallor, where the music is simpler and more groovy, and at times, even atmospheric, even going so far to include clean vocals as well.
Overall, this is one of the heaviest and spastic record I've heard all year. Very little has come this close to pure aggressive and percussive, at times, for an entire record. If you want a record that is like a fist in the face and full of technical ecstasy that you could only get from early Dillinger Escape Plan record, this is for you.
Overall Score: 7.5
Highlights: This Is The Last Time I Repeat Myself, This Is Considered A Mere Formality, Pallor
Posted by maskofgojira at 11:32 AM