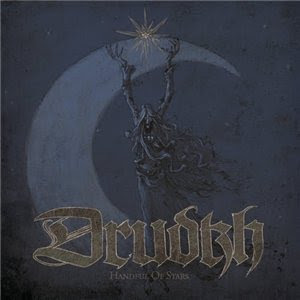 Drudkh is a Ukrainian black metal band that has been around for about eight years at this point. Featuring members of groups like Hate Forest, Blood of Kingu, and Astrofaes this project, while being quite mysterious due to the lack of photos and any interviews, has become one of the most respected groups in black metal today. This album is their second album after signing to Season of Mist, a label which then preceded to re-release the band's back catalog, before releasing this beast.
Being familiar with only bits of Drudkh's previous work, not due to dislike of it, but more out of lack of interest to put on an entire album, my mistake, this album shows a bit of a shift in direction. From what I've heard of the band's early albums, and even the two most recent ones, this album takes a bit more of a post-black metal approach instead of their usual folk/black metal. This is demonstrated right from when the second track begins, following the intro, and lush melodies just bleed all over the sound.
I found this album to be a bit more in the vein of groups like lantlos and Alcest's more recent work, using a bit of that post-punk/shoegaze melodicism and integrating it with their own sound. The sounds on here aren't as punishing as previous record may have been and are possibly more accessible due to the inclusion of melodies like these as well. This boarders into that genre that many people might not want to see the band move into, using more melodies and parts that are memorable. The slow downs on this album also don't really venture into folk territory as they used to but rather stay in a cleaner electric sound.
I personally found that this album was very enjoyable from start to finish, with nary the stray riff or loss of attention on my part. This is certainly not as fierce a record as some of the band's older material, but does show that they can try out some other styles and blend with their own successfully. Whether you liked this album or not, you have to admit that the band was able to make this sound unique to themselves, hear the epic Downfall of The Epoch.
Overall, I found this to be a very enjoyable album that demonstrates a talent that isn't usually demonstrated within this band. I'll agree that this is not up to the standards of the band's first two classic albums, but this is a cool experiment. If you like the whole post-black metal scene or black metal that has a more melodic edge, check this out.
Overall Score: 9
Highlights: Downfall of The Epoch, Twilight Aureole, The Day Will Come
Posted by maskofgojira at 10:29 AM