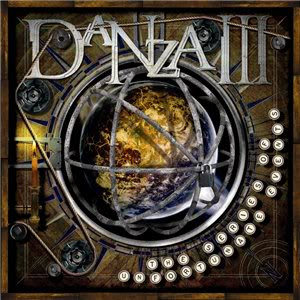 The Tony Danza Tapdance Extravaganza are a now trio/four-piece live from Tennessee that play mathcore. The band were known for their incredibly complex music and intense live shows and that was all before all but lead-vocalist Jessie Freeland left the band, he now remains the sole founding member. This is the first album that was done by a trio, with new guitarist Josh Travis, who also played bass on the album, and drummer Mike Bradley.
Never one to pull any punches, Danza III opener Vicki Mayhem blasts and grinds with a spastic rage that very few openers do. Spinning is what seems like a mad rage that just goes into wild directions, this song remains at a consistent level of intensity while being controlled. Near the end of this particular track, it becomes known that no longer are the grinding full-throttle start-to-finish songs solely what the band are trying to accomplish, around the last 30 seconds or so, the band introduce melody into the track.
In addressing what is most likely going to be the problem for most first-time listeners of this band, the guitars. All of the above will and does apply to not just the first track, but the entire album. This is technical, this is grinding, this is heavy, 8-string guitar heavy by the way, and it can be a bit difficult to wrap your head around at times, but if you take a breather and just let it flow, you can find the light in each track. That light, the melody or atmosphere, that carries each track no matter how subtle, is in there. Despite all the technical work done on the 8-string, the bass, which is a 6-string, has been said to be nowhere near where it was on previous records. The bass on this album is used more as a rhythm guitar while previous recordings have showcased wild slapping and the occasional tapping sections that really just put the music over-the-top even more.
While the drums are played, they don't really do anything that previous drummers have done, so the only thing left is the vocals. Jessie is one of the best screamers to come out of the scene in recent years, his more hardcore-esque screams and growls are intense and are consistently in your face throughout this record. It has to be said that a lot, and I mean A LOT, of vocalists, especially screamers, growlers, and grunters, appear to just go through the motions while providing vocals, Jessie has a real passion for the lyrics he's screaming about, and that comes through on here, hear a track like Suicide's Best Friend.
This is an intense record, and at times can be a bit overwhelming, that cannot be denied, but as said there is a light in every song. Tracks like There's A Time and A Place For Everything and Hour of The Time are able to blast you in the gut for their entire duration, but they also have those moments of melody behind all that pounding rhythm. This is an album filled with chugging rhythms, yes, but the shear intensity of that 8-string just makes it seem so much more entertaining than some kid that just picked up a 6-string and started hitting that top string.
Overall, this is a very good and heavy record, easily one of the heaviest sounding this year. Once again, this is a record that might be a bit difficult to listen to if you've never really listened to this band before, but it ultimately rewards you with great songs. If you've never heard of this band or if you like bands like Meshuggah or The Dillinger Escape Plan, or bands that are in the same vein, check these guys out for sure.
Overall Score: 8.5
Highlights: I Am Sammy Jankis, W.A.L.L.S, 12.21.12
Posted by maskofgojira at 11:00 AM