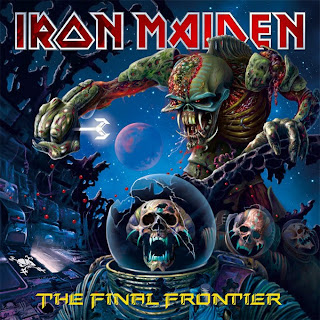 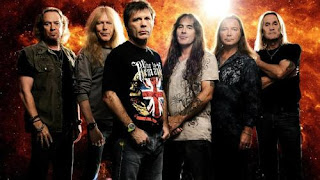 Iron Maiden are a heavy metal band that need no introduction to anyone that is in any way familiar to the metal genre. Legendary vocalist Bruce Dickinson, returned to the band in 1999, with guitarist Janick Gers and have released three albums since then. This is their fourth album with Dickinson and Gers, following up 2007's "A Matter of Life and Death."
Beginning with a baselines, Satellite 15... The Final Frontier opens up with an almost tribal drumbeat and a simple guitar riff. Spacey effects swell in the background of the intro to the track before Bruce's siren vocals come in and the entire thing just begins to take flight. The rest of the track follows with the recent style of more progressive songwriting that involves gradually moves through a traditional Maiden riff into moments of almost neo-classical shredding and a good-to-God anthemic hook in the chorus. The four tracks that follow this track don't top it's epic nature, but are much more melodic and are perfect fits for future singles.
Probably one of the most curious tracks on here is the almost power-ballad sounding Coming Home, which may be a first for the band in their entire discography. Almost every other song on the album retains the metal sound that Maiden has developed through their career. Other songs are also not as straight forward as this track is, not really moving around a lot, but sticking to standard format of song structure.
The second half of the disc shows the more progressive style that the band has taken on recent albums with lush guitar melodies and beautiful lyrics telling stories that just take your mind away on a journey, for those that haven't experienced that with the other hundred Iron Maiden songs. I think that it can be said honestly that this record could be divided into two real halves, the first half, or the first five songs, have a much more single and anthemic hook driven style while the second half is more progressive and expansive sounding. This second half is where some fans might be a bit disappointed, if you disliked the last two or three releases from the band, because they are long, epic songs that don't give up a hook as up front and directly as other songs have. The textures that are used in tracks like Starblind and The Man Who Would Be King are simply fantastic and sound like a lot of time was spent on creating a certain atmosphere surrounding the certain parts to capture that vibe that is experienced.
On a final note, this record is probably the best out of the last several that Maiden has released, and I, personally, thought that "A Matter of Life and Death" was a great record; but unfortunately, or fortunately depending on your view of this, this record falls short of being classic. As great as this record is, and any record that comes after this one, Maiden will probably never again create a record that rivals their classics, "Killers,""Number of The Beast," and "Piece of Mind," ever again. Taken for what it is though, this is a great record that tops many other band's masterpieces, so it's still a high grade in my book.
Overall, this is just another great record from a band that has seldom put out a bad record. It's really a record that might not be as direct as even the last one was, but does contain songs that, I believe, are better. If you like metal, this is a must, but that's obvious.
Overall Score: 9
Highlights: Satellite 15... The Final Frontier, Isle of Avalon, When The Wild Wind Blows
Posted by maskofgojira at 8:51 AM