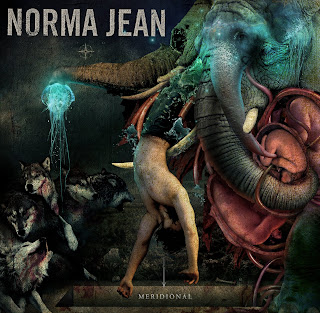 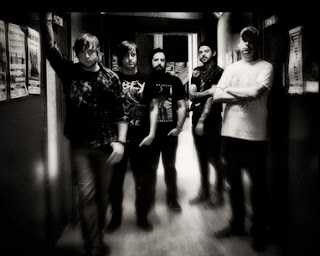 The Core Of Their Sound.

Norma Jean are an experimental metalcore group from Georgia. This is their fifth album and is supposedly a return to their more technical and crazy side. The band have always gone the extra mile to separate themselves from the typical metalcore bands, we'll see if that's the case.
For those that aren't aware of Norma Jean's past work, they started out as a noisy mathcore-ish band on their first record, which was after the decision to end the band's first incarnation Luti-Kriss. Ever since then, the band has, with every record, developed a slightly more melodic and, somewhat, melodic metalcore sound. This album takes the most melodic sound of the band's more recent material and mixes it with the more aggressive and slightly frenetic nature of their first two releases.
It's very apparent that this is an angry record as soon as the second track begins, a short two and a half minute track called Anthem of The Angry Brides, fitting. This track in particular is fast and slightly technical, recalling the band's earlier work very well, the first track contained more of a melodic sound, but those two tracks can sort of give you an idea as to the combinations that this record contains, because those two tracks are probably some of the only tracks that stick to one side of their sound. This record, despite using two sounds that the band have already used, sounds fresh and, maybe not unique, but unlike anything the band have done before. The angry tracks on here are like fists to the face while the melodic songs are ones that have hooks that show the band's more post-hardcore influences, combined they work like a bridge between the two.
It can be said that this record contains not only some of the band's best songwriting, but also some of their best guitar playing. Tracks like A Media Friendly Turn For The Worse or Blood Burner has some great melodic harmonies, but also moves around with some angular sounding grooves that just get the blood pumping. Falling From The Sky: Day Seven also shows the band mellowing out into more subtle and almost ballad-esque territory. The Everlasting Tapeworm on the other hand demonstrated more use of subtle guitar textures in the background.
Overall, a very solid record that shows Norma Jean are still a band that is well worth liking even if you hate metalcore due to their constant push for change. This album has some of the band's most catchy and heaviest moments on it, so a win for all of their fans. If you like experimental metalcore that is not too heavy in modern metalcore, check this out.
Overall Score: 8
Highlights: Bastardizer, A Media Friendly Turn For The Worse, The People That Surround You On A Daily Basis
Posted by maskofgojira at 8:53 AM