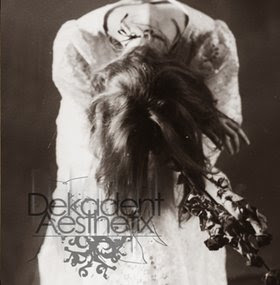 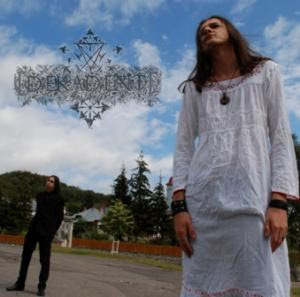 The Mentally Challenged Working With The Depressives.

Dekadent Aesthetix is a post-black metal duo from Romania. The duo have roots in primitive black metal but have since evolved past that singular sound. This can be looked at as the debut release from the duo, as besides a some demo tracks, the only other release was a split album with depressive rock band Joyless.
As soon as the opening track, Audio Curse From Transylvania, ends, a gun is cocked and the real first track begins. This single track reveals that this is not just a depressive black metal duo, but a group that are willing to experiment with anything they can. Post-punk melodies push the track forward while sampling some rather odd movies, ones that I don't know about, while the real vocals are processed and soar above everything else.
Songs move through genres while keeping a dark and eerie vibe fluid throughout each passing track. Even when you have elements of post-punk, black metal, death metal, and classical music all mixed together, it doesn't loose the atmosphere. This is probably one of the few things that actually links this duo to the depressive or post-black metal scenes at all.
The genre switching puts the style more into that of avant-garde more than black metal, as the Ladytron cover of 17 is based, sonically, more in that of electronica than any sort of metal. There are more than a few points on this album, in both that cover and others, that the sound has an 80's synthe pop sound to it. There are still plenty of tracks that are heavy and maintain a black metal sound, but if you expect any track to maintain that style throughout it's entire course, you'd be mistaken. If you don't much care for the songs that delve into classical, post-punk, or electronica, songs like Shyny Morning and Whore Riflefuck have a more black metal/grindcore vibe to them and are much more intense and aggressive tracks.
It can be said that for outlandish some tracks are, they do work for the most part. There are several tracks that do veer into territory that doesn't really belong, such as chanting and animals sounds. These inclusions can serve as little more than annoyance and distraction from the album, and ultimately end up hurting the entire listen.
Overall, this is a strange album that can definitely be put into the avant-garde genre of metal. The vibe is most definitely black metal while the sound itself is certainly far from being simplistic or straightforward. If you like music that wanders around a lot, check this out.
Overall Score: 7.5
Highlights: Suicide Hobby, Rock'n'Roll Machine, Incantatie
Posted by maskofgojira at 6:17 AM