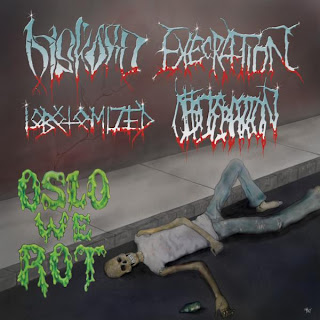 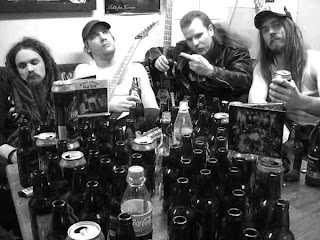 The New Wave Of Old-School.

This split album comprises three of the most respected up-and-coming death metal groups from Norway. Each of these bands does have their own style, but, they are all takes on early 90s American death metal. This is a must for any die-hard fan of the genre.
The first group on here is Lobotomized. They contribute three songs, two being covers to this split. Their sound is described as a mix between late-80s thrash, punk, and death metal. The sound of their recordings maintains that raw punk aggression where everything comes out loud and dirty.
Though these guys contributed the most songs, all of them only add up to just over six minutes. The first track, Piss On My Grave, is a quick aggressive burst of distortion and vocals. This track maintains a bit more of a thrash vibe, but the vocals are really raw and throat retching harsh. The next two songs, Golden Showers, a Mentors cover, and I Shit On Your Grave, an Autopsy cover, are pretty true to the originals, with the Mentors' cover hitting that gritty punk sound while the Autopsy one is fast and sounds exactly like the title. 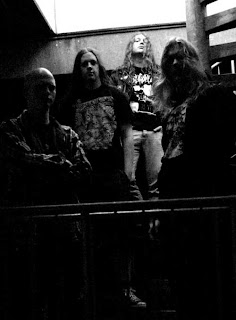 The next band is Obliteration. This band is one of the most respected newer death metal bands to have come out of Norway, with their Autopsy meets Dismember style of playing. Their previous two full-lengths have garnered praises from both the press as well as Darkthrone drummer Fenriz.
They contribute one song, Envenomed. This track maintains that almost proto-death metal sound early on by starting very uptempo with almost a punk energy, but slows down near the track's end and goes completely doom. This guitar solo on this track completely tears through what's behind it, acting like a knife cutting through warm butter. 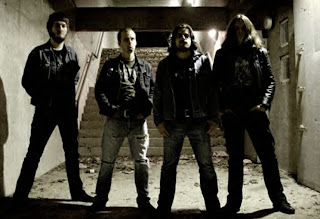 The third band on this split is Execration. They are by far the most technical and brutal band on here, citing groups like Gorguts, Suffocation, and Immolation as influences. So far they have only released one EP and full-length before coming on this split.
Entheogen is the title of the track they put on here. This track is not only the most brutal and technical, but also sounds the best; it retains the rawness that the other groups did, but is a bit clearer and not as muddy sounding. The sound of their influences comes through on here, mid way through the track a dark brooding atmosphere seems to enter the track, not unlike that of Immolation, while a good portion of the riffs used are more tremolo picked, recalling a bit of Suffocation. 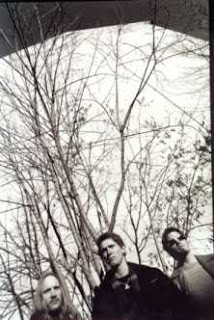 The last group on this split is Diskord. They are by far the oldest band on this split, having been formed in the late 90s, but only releasing one full-length so far, 2007's "Doomscapes." Their sound is a bit more sloppy sounding compared to the other bands on here, but retains the same sort of vibe.
Diskord provide this split with two tracks, the first being As The Circus Leaves The Galaxy, and the second being Cease of Existence MMX. The first track is eerily similar to bands like Obituary and early Death, with a sound that is a bit sloppy, but is a bit more melodic. The second track is similar, but a bit has a bit more of a thrash edge.
Overall, this is a good and solid release that contains some of the best underground death metal coming out of Norway right now. Nothing on here is too modern sounding, in other words, this is not clean and polished sounding, it's raw, dirty, and truly aggressive. This is a must for anyone looking for some good old-school death metal.
Overall Score: 8
Highlights: Envenomed, As The Circus Leaves The Galaxy
Posted by maskofgojira at 9:06 AM