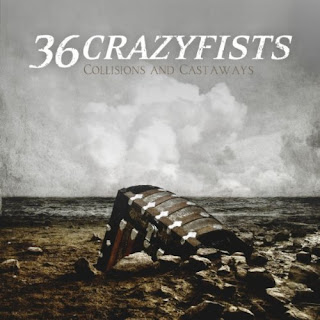 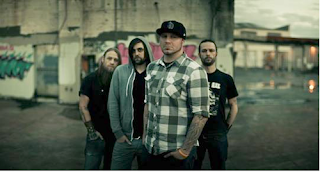 If You Thought Their Last Record Was Good.

36 Crazyfists are a metalcore outfit from Alaska. They gained moderate success early on with their slightly heavy take on nu metal but have since evolved into a metalcore based sound. This is their fifth overall record and once again tries to sound cool with a now uncool sound.
First off, I had my share of flirtations with this group throughout their career, finding them being slightly intriguing or having a good hook here and there, but have been fairly disappointed by entire albums though. Their last album, 2008's "The Tide and Its Takers," I found myself leaning a bit more to the favorable side of the band, their sound make use of a tried metalcore sound, but with extremely effective hooks, this record I can't find so favorable. The first three records from the band I always saw as the band kind of being a mix of modern metalcore and their nu metal roots, but this is probably the band's most metalcore, and it falls short of any standard I would have ever put on this band.
The music on here is so, I hate to say it, pitifully generic and bland, it's almost painful to listen to. Multiple listens reveal no hidden details or anything new that isn't obvious on a first listen, which at times becomes almost tiring. The band rarely seem to explore new territory on here, staying in the core of actual mediocrity, I found myself actually drifting to sleep during certain songs, Anchors being the most notable point for me. Breakdowns are used numerous times on this record, while that in itself isn't the worst thing ever, it becomes tiring after about the third track.
Vocalist Brock Lindow has, in my opinion, always had a bit of a unique singing voice, maybe not the most melodic or technically great, but different enough to set him apart from others. This album turns his voice into possibly one of the worst I've heard in a long time, or that I've forced myself to sit through, his singing voice is underused on this album, while his usual decent growl/roar is now a high pitched scream. This scream is used throughout the album and serves as a constant ear piercer, sounding like some random scene kid picked up a mic and started screaming into it, tracks like Mercy and Grace and The Deserter are especially annoying.
Overall, I found this to be an extremely boring and very generic album. No disrespect to any fans of this band, but this is far from even putting on once in a while, I heard it several times, and have only grown increasingly angry at myself for each repeated listen. If you're a fan of the band you'll probably listen or check this out regardless of my opinion, but otherwise, stay away.
Overall Score: 2
Highlights: In The Midnights, Trenches, Caving In Spirals
Posted by maskofgojira at 9:09 AM