Enemy of The Sun - Caedium 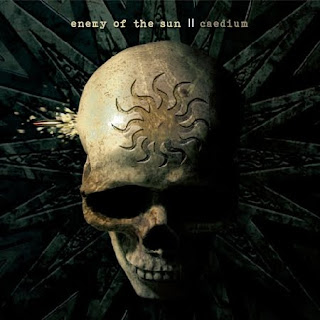 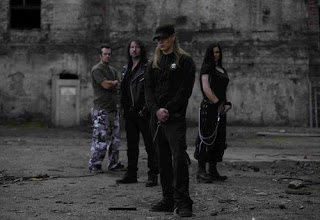 They Came From The Diversity Club.

Enemy of The Sun is an experimental gothic metal group from Germany. The group was formed in 2006 by guitarist/producer Waldemar Sorychta who helped shape groups like The Gathering and Lacuna Coil. This is the group's second album and is even more eclectic than their debut.
Even on the debut record, Enemy of The Sun was very diverse, often shifting between melodic death, gothic, and a bit of avant-garde metal. This album in that sense is very similar as a definitive style is still not a priority for these songs. This one factor is really the band's greatest strength and weakness, as the band are able to pull off each genre pretty well in most cases, but the songs themselves suffer for lack of a real catchy moments that sticks in your head.
Each member's performance in and of themselves is pretty decent though. Sorychta's guitar playing is solid and diverse, bouncing between melodic thrash metal riffs, Spanish acoustics, and the occasional progressive melody. The bass, Alla Fedynitch, is solid, not doing a whole lot to define a song, but keeping a good groove either on it's own or when laying low behind the guitars. The vocals, Jules Näveri, are also good, being able to pull off some good growls, but also some decent clean singing as well. The drumming, Daniel Zeman, is also well done, not doing anything overly technical or special, but keeping a nice foundation for everything else. That's the whole band, except for the keyboards that come in some tracks and really just turn some groovy tracks into a weird, almost avant-garde, song, hear the electronic beats on Castaways In The N.W.O.
It seems as though when the band get rid of the electronics, or use them very sparsely, the band can get a nice groove together that is still entertaining. There are several times when the band use simple symphonic strings to back them and end up sounding better than some of the weirder piano lines and other tricks used on some tracks. It turns out the best though, when Sorychta decides to make his guitar lines more progressive instead of using samples and keyboards to try and do that, hear tracks like Ticket and Paradigm. Songs that maintain a high level of energy also work as well, hear Stolen Sky.
Overall, this is a pretty decent album with some good songs on it. It might benefit the group to try and craft a signature sound for themselves for their next album, like they did for the latter half of this album hopefully. If you like melodic thrash metal that sticks it's feet into some other genres, check this out.
Overall Score: 7
Highlights: I Am One, Ticket, Sky Shooting Stars

Posted by maskofgojira at 11:15 AM