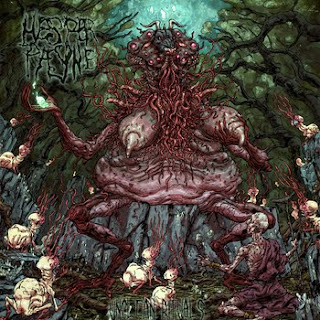 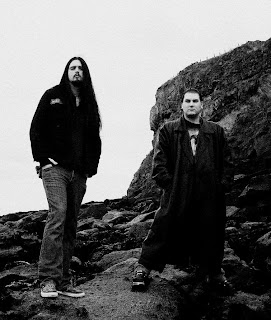 Herper Payne are a death/doom metal duo, trio live, from the UK. This is the debut full-length of this group, having previously released a compilation of demos and and EP beforehand. The band was originally formed by vocalist/guitarist/keyboardist Brooke Johnson, and he has been the sole remaining member since the beginning due to several line-up changes.
The music on here is pretty much the epitome of death/doom metal, it sounds dirty, it's slow, and the vocals are brutal; but, with all that comes an almost quirky nature to this album, or band, where things are not as straightly performed as most groups or artists performing this style. The music has this weird angular style on here that takes the music into some weird territory, and the vocals are able to reflect that. If you were expecting something to be in the style of old Paradise Lost or My Dying Bride, you'll get a very outlandish version of that.
The music, as stated, is slow and at times morbid sounding, but the riffs are angular and at times do move into an almost sludge metal style, this is noticeable in Empty Emperor. The death metal comes in and out, as the music has more in common with the doom side, the occasional death metal riffs and low gurgles don't play into the sound as much as someone might think due to the tag placed on this group. The guitar playing on here does indeed capture a unique mood, unlike that of a lot of doom records I've heard, in that some spots actually managed to make me feel uncomfortable, even though I did indeed enjoy the song, hear the funeral doom track The Maiden and The Mariner.
The vocals on here are a bit more in the doom vein as well, sorry to disappoint those that were expecting the low gurgles and growls, though they are used, hear opener Hesper Payne. The vocals are very dramatic and at times, over the top in performance, very much in the vein of vocalists like Robert Lowe (Candlemass, Solitude Aeturnus). The vocals aren't just the over dramatised because there's something inexplicably quirky about them as well, it might just be the tone in which the vocals are delivered. As the album progresses, the vocals seem to develop further into a traditional doom sound, just something that stuck me as a bit weird.
Overall, this was a very good album with very few moments that drag on. The more abstract take on this album really does make it stand out among many other artists put under the tag of death/doom. This is certainly a more obscure release, as the band are releasing it for free, so if you're into doom metal, and all of it's sub-genres, definitely check this one out.
Overall Score: 8.5
Highlights: Mirthless Dirge of The Toadstool Druid, Lord of The Green Abyss, Sarkless Kitty's Weeping

Download the album for free at this link:
http://hesperpayne.bandcamp.com/
Posted by maskofgojira at 10:02 AM