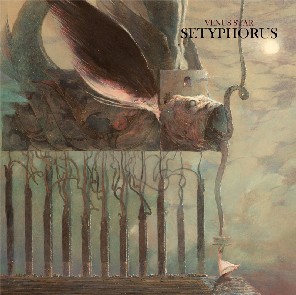 What we have here is another product from Atvar of Circle of Ouroborus, but as you'd most likely expect, it is a different beast than his other bands. I've covered both Circle of Ouroborus and Rahu more recently, but even including this project, he still has a couple more groups that you could look into, all of them actually standing apart from each other stylistically as well. I won't go into the other bands, but I think that if you want to hear some interesting black metal you should definitely look into them, but onto this album.
This was my first encounter with Venus Star so I really didn't know what sort of project it was going to be. I had read a review that had said that it was more death metal oriented than some of Atvar's other projects, but beyond that I was coming in pretty fresh. Listening through to this album, it's actually a little surprising because it really doesn't go out of its way to be as weird as CoO or as melodically direct as Rahu, or as chaotic as even Vordr, and is instead a more rough and ragged take on old-school death metal, with obvious inclinations toward black metal. Most of these songs are also pretty short, with most not even topping four minutes, so you're going to have to be into it to really get anything from this other than a kick in the head. Granted, it isn't devoid of atmosphere, so there are some notable links that do bind this to his other work.
I was a bit surprised by how the album was structured because the opening two tracks are quite doomy and slow going, which isn't typically the case for a death metal oriented band, you'll find a sort of old-school Paradise Lost-esque kind of vibe to them in my opinion. Following tracks switch up the tempo a bit more and bring to mind everything from material that reminds me of early Cannibal Corpse to something that I'd expect to hear from God Dethroned. Now, I want to kind of make a point by saying that there is a definite Incantation kind of vibe going on throughout this record, but I would not compare it the new wave of bands who attempt to sound like they're playing death/doom in a cave because what's on here isn't as muddy or cacophonous as that. The only reason I feel like the Incantation comparison can be made, for me, is because both groups have a sort of animalistic sense of rabidity while also being a lot more moody and allowing atmosphere to guide a song instead of intensity, which obviously can work hand in hand. Personally, while I do admit that I do happen to enjoy quite a few bands who are essentially aping Incantation's sound I do think it's nice to come across a project like this that manages to take certain traits from the band without sounding like carbon copy of them.
Overall, this was a pretty solid sophomore outing and one that I can imagine being a bit more accessible than some of Atvar's other projects. I certainly enjoyed it while it was on but it isn't as cerebral as Atvar's other musical endeavors can prove to be and is more bulky and visceral. Like I said, it doesn't really ever move into pure Incantation worship, but fans of bands that do that sort of style could certainly enjoy this record.
Overall Score: 7
Highlights: The Abyss Opens, The Vesica Tempest, On The Path of Return
Posted by maskofgojira at 10:00 PM