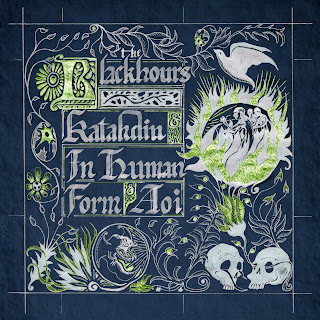 Recently I was fortunate enough to be sent a copy of this split of which I don't think I had found out about more than a week, at most, before, so I was quite excited to hear it. Though I had only heard of In Human Form beforehand, I was definitely excited in hearing what the other two groups sounded like in comparison. As far as I could tell, all three groups are still pretty unknown and so the split will more than likely open up fans from one band to the others, because all three bands are quite different from each other. I wouldn't be surprised if fans of one band completely disowned the others because each one is not really on a similar stylistic plane and can't really be compared to each other.
Of the three groups on this split the one I've seen the harsh reaction to from fans would be the medieval folk take from Aoi. The three songs they contribute act as an introduction and closer to the album as well as a divider between the two other groups. The sound exhibited from these three tracks is quite interesting in that when you think of folk music, at least to me anyway, this isn't the sort of sound that comes into my head. Musically, Oracon Con Piadade for example, is closer to what folk music is idealized as but, all the chanting is likely to throw some people off. Probably the biggest fault for these songs is that the production used on them is quite raw and rough around the edges and it doesn't really feel appropriate for the sound the band is going for. All in all, I don't think the material they contributed is as bad as I had heard it was, but I definitely believe it will be the most polarizing band on the split.
Like I said above, In Human Form was the only band of the three on here that I was a fan of beforehand and so I kind of had an idea of what kind of style they were adding to the split. The two tracks contributed by these guys happen to be the longest on the split as well as the longest tracks the band has released to date. When I listen back to the band's earlier EP, the material on here sounds a lot more frenetic and black metal than before. The death metal elements are still very present but the riffs tend to just explode into crazy off the wall parts rather than stick to a more straightforward kind of aggression. Songs rarely stay at the same pace for longer than a minute, often slowing down for several seconds before jumping right back into full-on hyperactivity.
The last band on here is Katahdin. Unlike the experimental and progressive black metal of In Human Form, these guys play a much more thrash influenced style of black metal where the songs are fairly short but all pretty fast paced. You'll find that the three songs they contribute to this split are probably the most accessible on here because they tend to be more riff-based songs that don't noodle around too much. Even the longest track, Gizos, which incidentally is probably the best track from their three contributed, manages to make full use of its five minutes to just give you a riff explosion that ranges from more traditional thrash ones to frenetic black metal melodies. I believe that the raw production on this split suits the material these guys contributed the best as well.
I think it's a solid piece of work, not without its flaws, but I don't see anything too wrong with this release. I understand that the idea of a pretty raw production and some material that sounds a bit out of place might not sound all that appealing, but I'm sure those who check it out will find at least one of these bands interesting. Each band is very competent and can obviously write songs that are entertaining and engaging for the most part; aside from the stylistic differences between the bands, I don't see why fans of black metal, and maybe folk, maybe, wouldn't enjoy this release.
Overall Score: 8
Highlights: Myopic Configurations, Oracon Con Piadade, Gizos
Posted by maskofgojira at 2:18 PM