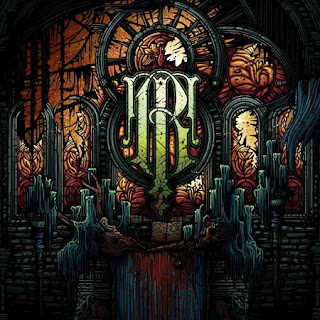 At this point in my musical life I can honestly admit that I once listened to metalcore, I think it's a natural step in a lot of kids my age to listen to metalcore before delving into more aggressive or interesting underground bands. Though I have lost interest, for the most part, in a lot of the bands I used to listen to, there are a couple that I do still put on from time to time. Bleeding Through was always one of the bands that stood out to me as being a bit different from their peers in the metalcore world and so, obviously, they are one of the few that I will listen to every once in a while.
I think it's important to say first off that this is not the same Bleeding Through that gave us, in my opinion, metalcore classics like The Truth or Declaration. I figure it's pretty widely accepted that the latter album is the band's best release thus far, and that the self-titled album that followed it just didn't live up to it. Four years later and listening back to that album, I do still believe that it is the band's best, but how does this new one stand up in comparison to it? Well, I think to say that it's as dull and uninspired as the self-titled would be doing this album a disservice because it is a better album in my opinion. First off, while vocalist Brandan Schieppati has never been the greatest of lyricists, I have always respected the honesty and passion that he brings to his vocals, which, once again, aren't the greatest, but are actually distinguishable from pretty much any other metalcore vocalist in my opinion. I was disappointed that the last album featured very little of him actually singing, and while this one still sees him focusing more on growling and screaming, he does sing on a couple of tracks. As for the keyboards which definitely began to take more of an up-front role in the band's sound on the last couple of releases, we have a rather mixed use of them on here. Some tracks definitely feature them very high in the mix, which usually means that that track is going to be more or less of a black metal track, and then you have the tracks where they're a bit more in the background and pretty much disposable, the hardcore/metalcore-ish track. That sounds a bit harsh, but excluding a couple of standout songs, Trail of Seclusion for instance, I did feel that that's where the keyboards stand on here.
Now, I don't know if this is just me, but I found this album to follow along the same path that the self-titled took in terms of songwriting, which means boring and uninspired for me, until about half-way through. Once Walking Dead hit, I did feel that that was where the band was showing more interesting and memorable songwriting and took a step up in quality. While none of the songs really ever equal that of some of their greatest work, there are tracks on the latter half of the album that definitely prove to be the strongest on the entire album. Tracks like the more atmospheric and melodic Trail of Seclusion definitely stand out above other tracks, hell, even The Devil and Self Doubt stood out because it sounded, more or less, like an older Bleeding Through song.
But with all that being said, there are still negatives to this album. Probably my biggest problem with this album is the production, which is fine for the most part, but the drums are just way too triggered and way too loud in the mix for my taste. They stand out too much to simply be ignored and it is the biggest flaw with the album, in addition to otherwise passable drumming, for what the band is doing. There are seriously moments on here, Everything You Love Is Gone, where the triggers are louder and clearer than what the guitars are doing. Another one, though not nearly as big as the last one, is the fact that this is a mix of symphonic black metal with metalcore, at least to me, that sounds terrible, and though the band did pull it off on Declaration, the self-titled and this album just seem to fall short in the genre-fusion department. In all seriousness, there is nothing inherently bad about the band's songwriting, but the fusion just seems unfocused at times and you end up getting a bunch of what sounds like random hardcore and symphonic black metal-ish tracks. As a side-note, I still do believe that these guys play this style (blackened metalcore?) than a band like Winds of Plagues ever have or will.
I was impressed with this album, seeing as I didn't come in with high hopes after the let down that the self-titled was, but this is not masterpiece and I doubt it will be the album that the band will be remembered for. I'm really not sure what path Bleeding Through are attempting to follow with their most recent releases because they do sound like they're having a bit of an identity crisis, but I do hope they are able to find a sound that they can work more cohesively within the very near future. Like I said above, it's definitely better than their last effort, but it's not their best and I'm hoping that after this the band will finally start blending black metal and metalcore more than leaving them separate. If you're a fan, chances are you'll enjoy it, but if you insist on checking this band out, go for their older material.
Overall Score: 7
Highlights: Walking Dead, The Devil and Self Doubt, Entrenched
Posted by maskofgojira at 5:05 PM