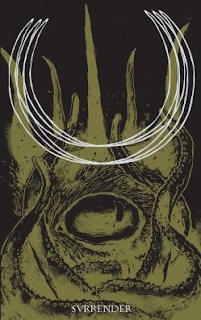 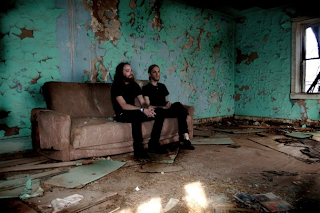 Time and time again since my first encounter with the duo known as Servile Sect I have been proven wrong on my initial review of their Realms of The Queen album. The couple of releases since then have turned me into a huge supporter of the band and I am now eager to hear anything the duo release. Once again released on the always amazing Handmade Birds, this new tape is considered the companion piece to last year's highly lauded TRVTH that was a huge critical success.
It's important to note that if you are expecting this release to be similar to the sounds found on TRVTH, you will most likely be disappointed because this is not the same release done over, but an extension of similar ideas. If TRVTH was a journey into the unknown realms and reaches of space, than SVRRENDER is a trip into the void, a black hole of sorts. This release is much darker and is far less psychedelic than its companion and thus leads to a very different response from the listener's standpoint. I would venture to say that the eight tracks that comprise this release are darker than that of their companion record as well. Musically, when it goes black metal, it's far less of a mindfuck and tends to sound much more noisy and traditional, in a black metal sense. Like I said above, I'd compare this to going through a black hole, this first half of the cassette is a rather harsh and chaotic listen where black metal, noise, and dark ambiance blends together and winds up pooling together into a spiraling burst of hatred and disgust. It is, all together, a more rough going and abrasive experience than any of the duo's past material in my opinion.
The B Side of the cassette is apparently what most are eager to discuss though, which I can certainly understand. While the first half of the album is an assault that more or less would define the physical transformations one might encounter while travelling through a black hole, the last three songs, Side B, are what I'd relate to the mental shifts. If you thought the psychedelic headtrip on their last album was a nightmare, you'll find that these last three songs are far darker and less "accessible", if you could even use that word to describe what the duo is doing. You'll find less of a krautrock-meets-spacey synthes that really helped to define their last record, or even their use on the A side of this cassette, the soundscapes found on the end of this release are much more in the vein of what has been accurately compared to that of Locrian's blackened drone. I wouldn't say that the ideas themselves are that foreign to the band, obviously if you've listened to any of their previous work it's obvious that they've been playing with drone ideas since their first album, but here it's less of a stylistic influence and sounds more like they've finally fully embraced it into their sound.
As always, Servile Sect never fail to impress and continue to expand the sonic territory they work within, making it ultimately harder to try and describe exactly what they play to others. Fans of trippy, weird, and forward-thinking black metal are probably already aware of this band, but if for some reason you have yet to come across them, you'll have definitely found a new favorite band. If you haven't listened to them yet, I'm really not sure what to tell you except that you are sorely missing out on one of the most exciting black metal acts I've come across in some time.
Overall Score: 9
Highlights: Sinning In Space, Cut The Root, Neon Gates of Hades
Posted by maskofgojira at 12:25 PM